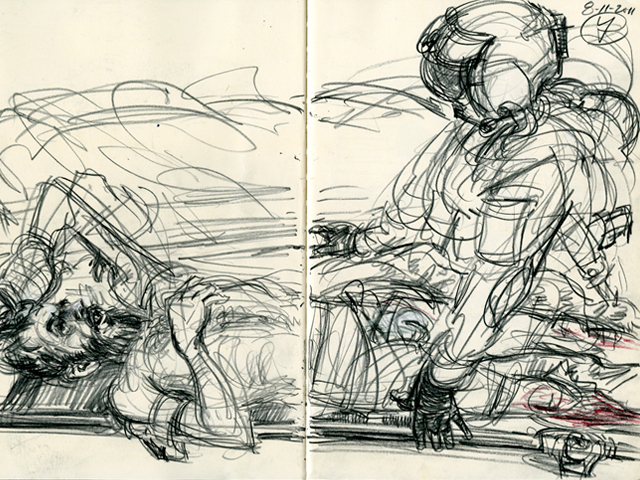 KANDAHAR, Afghanistan - Covering a war by drawing sketches of it seems as anachronistic as fighting a war by using a bow and arrow. Especially if those sketches are done by Victor Juhasz, an artist who is better known for his satirical, outsized caricatures in the pages of Rolling Stone and the New York Observer. "Most people familiar with my work know it as politically satirical, conceptual, with a sense of humor that draws heavily on my love of the old Warner Brothers cartoons and very early MAD magazines," says Juhasz.

So why would an artist known more for his drawings of Sarah Palin and Barack Obama head into a war zone?

"It seems like the right place to be. Much of my professional career had been spent doing work that essentially paid bills and raised a family," said Juhasz, who described embedding with the coalition forces in Afghanistan as an "opportunity to finally do something that fulfilled a different creative urge in me."

The work Juhasz has done in Afghanistan is completely different in tone and style than his other drawings.

It draws on the long history of combat illustrators, which can be traced back to Winslow Homer's artwork during the Civil War, through Howard Brodie's drawings of the seminal battles of World War II , and continuing on in the wars in Iraq and Afghanistan.

"The sense of responsibility to this remarkable tradition is very great," says Juhasz. "However, unlike Brodie during Guadalcanal and The Battle of the Bulge, I have a nice digital camera to back up and fill in the necessary details to what I can't get down on the spot."

Capturing action on the spot is the essence of what Juhasz tries to do with just pencil and paper, using photographs after the fact to try and fill in any details he might have missed. Trying to sketch the bulk of his drawings as the action is happening, Juhasz found his skills put to the test while he was embedded with a medevac unit, flying in the back of rescue helicopters while they picked up wounded soldiers.

"A drawing, or several drawings, done in the course of a 15 minute flight back to a military hospital, on a vibrating copter, requires sacrificing detail for essence," he says. "For a civilian like myself the greatest challenge is in not getting bogged down trying to include all the details under the very real pressure of time constraints and remaining focused on going for the guts of the drawing."

Accurately capturing the action in a life-or-death situation, a challenge under the best of circumstances, was made even more difficult by trying to draw in the back of a wildly bucking helicopter. (See sketch at the top of this blog.)

"That actually got put to the test during a very tragic rescue where we landed in a hot zone picking up a mortally wounded soldier," Juhasz says. "The pressure in those fifteen or so minutes flying back to the hospital was to get as much down as possible while capturing the drama of the intense effort to save the GI's life. The tunnel vision focus was there. How successful I was will be for others to judge."

Wars are now covered in multiple ways - on Facebook and Twitter, through numerous satellite television networks, and most actively on the Internet. But Juhasz believes there is still a place for the combat artist, covering wars in a way that would seem more in step with the Civil War than one being fought with high tech drones and laser targeting systems. "We are witnessing a slow but steady resurgence in this art form," he says. "Whether or not you agree with a particular war or war in general, artists have always been there to record the events that went down."

Recording these events isn't just a professional calling - it is personal as well. Juhasz's son, Ben, is a sergeant in the Marine Corps who did a tour of duty in Iraq. "i've got a soft spot for the Marines since he joined up," said Juhasz. "The fact that I have a son in the military does add a certain sense of responsibility to get things right in both visual and written information. I see this as a way of giving back in some small way since I never served in the military."