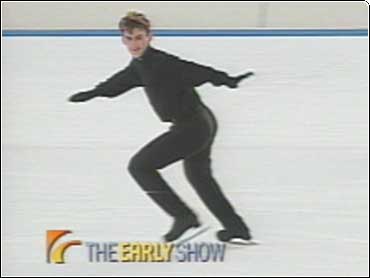 Todd Eldredge, the 1996 World Figure Skating champion and two-time Olympic figure skating team member, gave an ice-skating class Tuesday for 10 children who skate in the Special Olympics, and Early Show Co-Anchor Jane Clayson was on hand to talk to him.

"I just met these guys this morning," Eldredge said. "We're learning how to stand up and bend our knees and hopefully not fall on our butts."

The skating champion added that he enjoys his work with the Special Olympics, because "I get a chance to meet different kids around the country and work with some kids and have fun with them. It's the most important thing."

He is also skating with the FTD Champions on Ice Winter Tour 2000, which also features Katarina Witt and Brian Boitano.

"We have 30 cities in 39 days," Eldredge noted. "It's pretty quick, and travel is tough. We have a good time, and it's a fun tour. We travel around all the different states and cities and do exhibition-style skating. You just go out and skate whatever you want."

He said that he would like to skate in the 2002 Olympics in Salt Lake City. "If I'm healthy and skating well at the time and I qualify for the games, maybe I'll be there," he added.