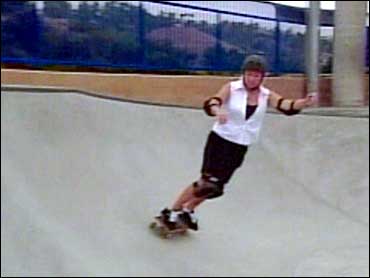 Roll out of the way, skater dudes, here come the skateboarding moms! As The Early Show national correspondent Hattie Kauffman reports, women who once gave up their boards for babies are now reclaiming the cement waves.

Barbara Odanaka says she created the International Society of Skateboarding Moms, "because I knew there were more moms than just myself out there. When I was growing up, there were so many girls skating that it stands to reason that 30 years later I wouldn't be the only one still obsessed."

Both men and women began skateboarding in the 1970s, when the sport was called "Cement Surfing." Debbie Hults, for instance, remembers "set[ting] up little ramps and put[ting] bricks under them and then your buddy would lay down and we'd try to hop over him." She laughs, and adds, "Until your parents came out and caught ya."

By the 1980s, however, skateboarding had become a male- dominated sport. Odanaka says, "A lot of girls became intimidated and walked away."

Odanaka is the author of "Skateboarding Moms," a children's book about a young boy who receives a skateboard for a present, only to have his mom snatch it and dash out the door to ride. She returns later, of course, to teach her son a few tricks.

This past Mother's Day, Odanaka organized the first "Mighty Mama Skate-O-Rama," an event that attracted women from all walks of life, including 80-year-old Liz Bevington. "I think it keeps you young," says Bevington of the sport.

When asked if she had ever been discouraged from skateboarding, she responds, "my doctor [did], when I broke my ankle."

And indeed, skateboarding is dangerous; perils include the possibility of collision with rambunctious teenage boys. Even with head-to-toe padding, Rose Bernfield still has several scrapes and scars.

"I can tell many stories on my arm," Bernfield says. "These," she says pointing to a few marks, "are a couple pools I skated. Leave a piece of you wherever you go."

And yet for all of its intense action, Odanaka argues skateboarding, "can be a ballet. You'll see people who [are] very graceful."

She also says that, were she given a $1,000 shopping spree, she wouldn't spend it on typically female fancies: "Sorry, Tiffany's!" she says. "I'd be right at my skate shop. I just love to pour over those parts, all those wheels in the glass like some women pour over jewelry in the glass cases."

In an effort to find other skateboarding-crazed moms, Odanaka launched a Web site where gliding, grinding moms from around the globe can post stories and pictures.