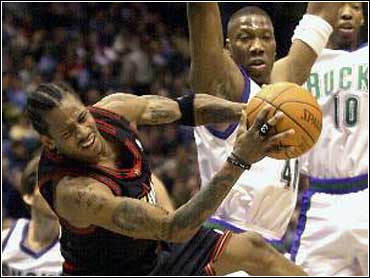 It's getting so bad for the Milwaukee Bucks that even their opponents are worried about them.

"We played all right, but they're going through a tough stretch that isn't like how they normally are," said Iverson, who was 8-for-25 from the field but didn't need to be any better.

"We knew they were down. We wanted to try to jump right on them."

The Bucks collapsed in the fourth quarter yet again, enduring a comically inept offensive stretch as the 76ers pulled away. Milwaukee has lost a season-high five straight and eight of its last nine overall.

"I've watched them a lot lately, and I just think they're going through a bad period," Sixers coach Larry Brown said. "You get down in this league, you need some breaks to get you going. I still think they'll be there at the end."

Coach George Karl has alternated between anger and passive acceptance during the Bucks' skid. After his team's latest loss, Karl tried the direct approach.

"They turned up the defensive heat (in the fourth quarter), and we couldn't handle it," Karl said. "They're not professional enough or angry enough, and if it doesn't change, we're going to continue getting our ... kicked."

Karl then bolted from his postgame interview room.

Philadelphia won consecutive games for the first time since Jan. 17 and 19, as five Sixers reached double figures in a balanced offensive performance. Tyrone Hill, who played parts of the previous three seasons in Milwaukee, hit all seven of his shots and finished with 17 points.

Philadelphia, which swept the season series from old rival Milwaukee for the first tim since 1979-80, maintained a lead between five and 11 points from the first three minutes of the game until early in the fourth quarter, when the 76ers made a 15-2 run to take an 86-67 lead.

Eric Snow's 3-pointer with 5:32 left capped the rally and sent frustrated Milwaukee fans to the exits.

Once again, boos rained down on the Bucks as they missed nine of their first 10 shots in the fourth. Milwaukee, which made 24 turnovers in the game, failed to even get a shot on seven possessions during the string because of turnovers and shot-clock violations.

"I think the last four or five games, we've been playing great team defense," Hill said. "It's important to start getting your defense in playoff shape about this time."

Ray Allen spent the game in foul trouble, and Milwaukee mostly used 6-foot-10 Tim Thomas in his place. That made for a strange defensive matchup with the 6-foot Iverson, but the Philadelphia star held his own and then helped lead the 76ers' winning fourth-quarter rally.

"It's official: The screws just fell off," Allen said. "We've got no confidence, we've got no togetherness."

Glenn Robinson, who finished with 24 points and seven rebounds, was the only Milwaukee player consistently hitting shots, but the Bucks remained content to keep the ball on the perimeter. Philadelphia shot 39 free throws to Milwaukee's 11.