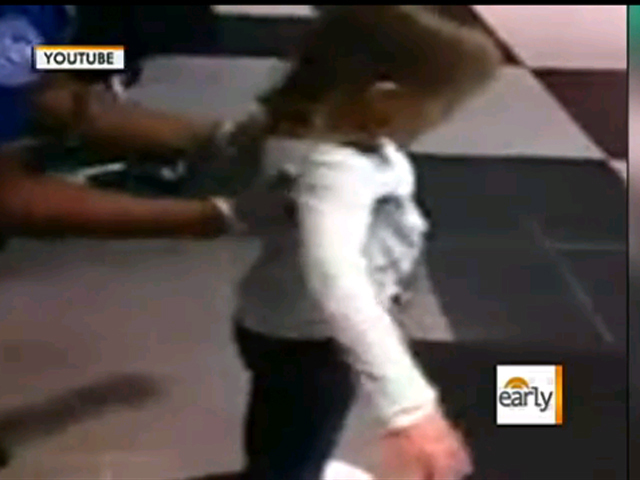 Video of the incident shows a female TSA agent explaining the manner in which she will touch the child as she goes through the procedure. The girl's mother asks, "Can't you just re-scan her?" to which the agent replies "No."

The agent appears to behave in a gentle and professional manner, and the TSA said in a statement that she followed proper screening procedures. The statement added that the agency is "exploring additional ways to focus its resources and move beyond a one-size fits all system while maintaining a high level of security" and "has been actively reviewing its screening policies and procedures to streamline and improve the screening experience for low-risk populations, such as younger passengers."

Still, the video has many asking whether the intense security screenings really necessary, especially for a little girl.

"A child who is visibly, audibly complaining, 'I don't want to do this,' should at the very least be given some privacy," Marjorie Esman, executive director of the ACLU Louisiana, told CBS affiliate WWL New Orleans.

The screener talks her through it, letting her know where she'll be touching next. But Esman questions whether all of it is really necessary.

"A 6-year-old child shouldn't be subjected to this kind of treatment in the first place if there's no reason to suspect her or her parents of being criminals," she said.

"Privacy experts don't like it at all, the critics call it security theater, but we have to say the screener here appears to be doing her job," CBS News national security correspondent Bob Orr told CBS' "The Early Show" Wednesday. "This patdown happens all the time ... somewhere in America. Whether we like it or not, the truth is it's part of the post-9/11 security."

"You can't take kids out of the mix, The exemption would point terrorists to a gaping hole in our security," Orr said. "It's not a theoretical threat. Terrorists have proven they can smuggle explosives aboard planes. ... The bottom line is al Qaeda is savvy, study our security system and practices and it's not beyond al Qaeda to use kids."

On Tuesday afternoon, at the New Orleans airport, Derionne Pollard said she flies frequently with her 4-year-old son Miles.

"He's never been patted down. He goes through security. He understands that process," Pollard said.

WWL showed her the video of the girl getting a patdown on YouTube.

"I think we spend a lot more time getting ourselves inflamed about things that aren't really necessary. That took all of, what? 20 seconds to get done? So, suck it up. It's a part of travel right now," she said.

Yukri and Daniel Amos both said they think the TSA is doing it to prevent any sort of attack, in an airport, or in the air.

"Given these times, you do have to do that. Because some people do use their children in a way that is horrible," Daniel Amos said.

However, the Seattle couple is split on whether kids should go through such an intense screening process.

Every passenger at Armstrong International gets a either body scan or a patdown. But Esman said she thinks the TSA should be more selective about who gets intensively screened.

"What we need is a system that will identify specific people who are under reasonable suspicion and subject them to additional scrutiny and not subject everybody else, not be subjected to that type of harassment," Esman said.

In the case of last week's patdown of a 6-year-old, the TSA maintains children have been used to carry explosives in some places, and that they have to be subject to the same restrictions as adults in order to ensure safety.