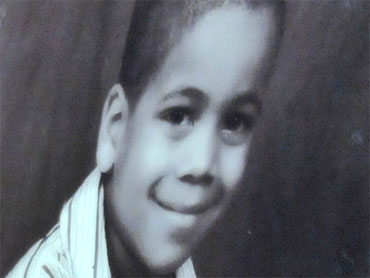 BRUNSWICK, Ga. (CBS/AP) Christopher Barrios was just six years old when he was forced to beg his rapists to let him go. They didn't.

"Please don't do this!" he implored them, say prosecutors.

But they strangled him to death anyway.

Wednesday, jurors in a Georgia courtroom heard a horrific videotaped confession from a man who admitted he and his adult son stripped, sexually assaulted and strangled Barrios inside a mobile home as the child pleaded with them to stop.

"He said 'I'm going to tell my daddy and my grandma,' and George choked him," 61-year-old David Edenfield said in the videotape, referring to his son, 34-year-old George Edenfield. David Edenfield later admitted helping strangle the boy.

The jailhouse interview filmed by police was shown during the first day of testimony in the trial of the elder Edenfield, who faces the death penalty if convicted of the March 2007 slaying of Christopher Michael Barrios. The boy was missing for a week before police found his naked body dumped off a road and wrapped in trash bags.

Prosecutor John B. Johnson told jurors in his opening statement that Edenfield and his son lured the boy into their trailer across the street from the home of Christopher's grandmother, then took turns molesting him.

"You will hear him say this from his own mouth," Johnson said of David Edenfield. "Christopher Barrios didn't want to be there. He said, 'Let me go! Please don't do this! I'm going to tell my parents!"'

David Edenfield is the first suspect to stand trial in the slaying. His son and wife, Peggy Edenfield, have also been charged with molesting and killing the boy, then hiding his body. The jury was selected from residents some 90 miles away because of pretrial publicity and the jurors are being sequestered in Brunswick.

Jurors later saw the first hour of the interview the elder Edenfield gave to a police detective a day after the boy's body was found. He at first blamed his son and denied any involvement, but slowly began to describe a horrible scene. 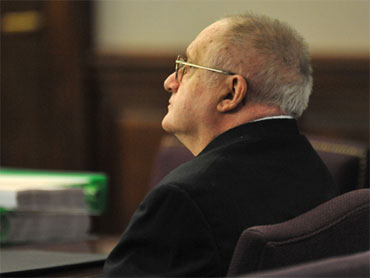 Edenfield said he and his wife watched while his son forced the boy to have sex.

Edenfield later admitted touching Christopher himself after Glynn County police detective Raymond Sarro showed him photographs of the boy's dead body. He said the child had been crying and pleading for them to stop.

Edenfield at first said he told his son to stop choking Christopher, then changed his story. He said he placed his own hands on top of his son's while they strangled the boy. Asked why he did that, Edenfield said, "I guess instinct."

"You saw your opportunity, when George was choking him, to see what it felt like?" Sarro asked.

Defense attorney James Yancey Jr. told jurors the elder Edenfield's confession was influenced by the police interrogators, but stopped short of telling jurors he was coerced.

Superior Court Judge Stephen Scarlett recessed court before Edenfield's attorneys had a chance to cross-examine Sarro. The detective was to return to the witness stand Thursday.

Christopher lived in a mobile home park in the port city of Brunswick, about 60 miles south of Savannah, where his father and grandmother had separate homes. He would pass the Edenfields' trailer when walking between them.

A shy boy with a big smile that showed off the silver caps on his front teeth, he loved superheroes such as Batman and Spider-Man.

The Edenfields moved into the mobile home park where the boy lived just a few months before his death. The family had been forced to move because George Edenfield was a convicted child molester. The family's previous home was close to a playground, a violation of Georgia's sex offender registry law.

Sarro testified police found Christopher's toy Star Wars lightsaber in the Edenfields' yard a few hours after the boy went missing. He said he then noticed the Edenfields peeking out their windows, which seemed suspicious because other neighbors were out helping search for the boy.

He said George Edenfield admitted he'd seen Christopher outside, then told the detective he heard voices calling his name.