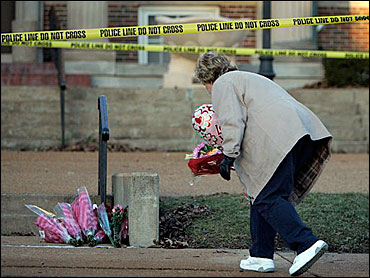 A gunman carrying a grudge against City Hall left a suicide note on his bed warning "The truth will come out in the end," before he went on a deadly shooting spree at a council meeting, his brother told The Associated Press Friday.

Arthur Thornton, 42, said in an interview at the family's home that he knew his brother was responsible for the killings when he read the one-line note shortly after word of the shootings was broadcast.

"It looks like my brother is going crazy, but he's just trying to get people's attention," Thornton said, explaining he believed the note reflected his brother's growing frustration with local leaders. Police have the note, he said.

After storming the meeting and killing five people Thursday night, Charles Lee "Cookie" Thornton was fatally shot by law enforcers. Friends and relatives said he had a long-standing feud with the city, and he had lost a federal free-speech lawsuit against the St. Louis suburb just 10 days earlier. At earlier meetings, he said he had received 150 tickets against his business.

"This is such an incredible shock to all of us. It's a tragedy of untold magnitude," Tim Griffin, Kirkwood's deputy mayor, said at a news conference. "The business of the city will continue and we will recover but we will never be the same."

St. Louis County Police spokeswoman Tracy Panus on Friday would not discuss what security measures, if any, were in place at City Hall at the time of the shootings.

The meeting had just started when the shooter opened fire, said Janet McNichols, a reporter covering the meeting for the St. Louis Post-Dispatch.

The gunman killed Officer Biggs outside City Hall. CBS News correspondent Cynthia Bowers reports that Thronton then took the dead officer's gun and firing both weapons as he stormed the council chambers, killing a second officer, the two council members and the public works director. The mayor and a journalist were also injured in the barrage.

As Thornton fired at City Attorney John Hessel, Hessel tried to fight off the attacker by throwing chairs, McNichols said. The shooter then moved behind the desk where the council sits and fired more shots at council members.

"We crawled under the chairs and just laid there," McNichols told ABC's "Good Morning America." "We heard Cookie shooting, and then we heard some shouting, and the police, the Kirkwood police had heard what was going on, and they ran in, and they shot him."

Thornton was often a contentious presence at the council's meetings; he had twice been convicted of disorderly conduct for disrupting meetings in May 2006.

The city had ticketed Thornton's demolition and asphalt business, Cookco Construction, for parking his commercial vehicles in the neighborhood, said Ron Hodges, a friend who lives in the community. The tickets were "eating at him," Hodges said.

"He felt that as a black contractor he was being singled out," said Hodges, who is black. "I guess he thought mentally he had no more recourse. That's not an excuse."

Franklin McCallie, a retired Kirkwood High School principal who once attended Thornton's wedding, said his longtime friend once told him that the city would drop what had become thousands of dollars in fines if Thornton "would just follow the law."

"In our long talks, I begged him to do this," McCallie said in a statement e-mailed Friday to the AP. "But Cookie said it was a matter of principle with him and that he wanted to sue the city for millions of dollars."

McCallie called Thornton's deadly rampage "a brutal and inexcusable act, the act of a person who was not in his right mind when he did it."

The weekly Webster-Kirkwood Times quoted Swoboda as saying in June 2006 that Thornton's contentious remarks over the years created "one of the most embarrassing situations that I have experienced in my many years of public service."

The mayor's comments came during a meeting attended by Thornton two weeks after he was forcibly removed from the chambers. Swoboda had said the council considered banning Thornton from future meetings but decided against it.

In a federal lawsuit stemming from his arrests during two meetings just weeks apart, Thornton insisted that Kirkwood officials violated his constitutional rights to free speech by barring him from speaking at the meetings.

But a judge in St. Louis tossed out the lawsuit Jan. 28, writing that "any restrictions on Thornton's speech were reasonable, viewpoint neutral, and served important governmental interests."

Another brother, Gerald Thornton, said the legal setback may have been his brother's final straw. "He has (spoken) on it as best he could in the courts, and they denied all rights to the access of protection and he took it upon himself to go to war and end the issue," he said.

Prayer vigil is to be held Friday at noon at the Kirkwood United Methodist Church, reports CBS News affiliate KMOV-TV.

Kirkwood is about 20 miles southwest of downtown St. Louis. City Hall is in a quiet area filled with condominiums, eateries and shops, not far from a dance studio and train station.

In a neighborhood of modest, ranch-style homes, the gunman's house appears neatly landscaped with colorful mulch, the property's circle driveway lined by well-placed shrubs. There were two concrete sculptures of eagles on the front lawn, along with a large fountain.

Outside the house, a tattered U.S. flag flew at half-staff, not far from a handwritten sign reading simply, "RIP Cookie. Only God can judge you!!!!!"