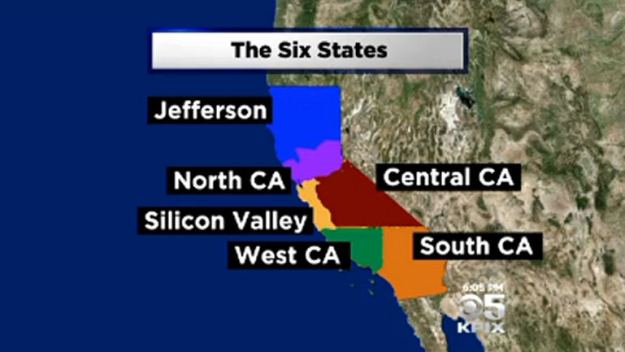 The campaign announced the development with a tweet Tuesday:

CBS San Francisco reports that Draper, who recently spoke at the Commonwealth Club in San Francisco, said that a state as big as California needs to be broken up to be more representative and more competitive.

"With six, you do get a good sense that you can drive 45 minutes in any direction and maybe be part of a different state and it keeps those states on their toes," he said.

According to the "Six Californias" plan, each of the six states would have its own government and own collection of elected officials, including congressional representatives.

The proposal is largely dismissed by opponents, however. They say that even if the measure were to be approved by voters, splitting the state would still require an act by Congress.

"This is a colossal and divisive waste of time, energy, and money that will hurt the California brand, our ability to attract business and jobs, and move our state forward together," Steve Maviglio, spokesman for the OneCalifornia committee, told the San Jose Mercury News.

Draper, though, remains undaunted about a Congressional act.

"I don't know whether it will be the Democrats or the Republicans but one of those two parties, at some time in the future, will politically want to have to have six Californias and I believe that it will eventually happen," he said

The petitions must be submitted to county registrars, who will have eight workdays to verify that the signatures are valid. If necessary, a thorough check could take an additional two months.