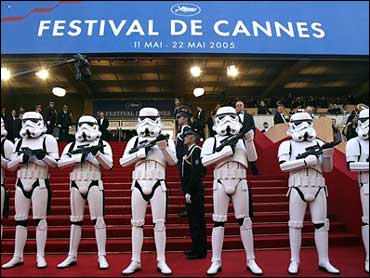 Without Michael Moore and "Fahrenheit 9/11" at the Cannes Film Festival this time, it was left to George Lucas and "Star Wars" to pique European ire over the state of world relations and the United States' role in it.

Lucas' themes of democracy on the skids and a ruler preaching war to preserve the peace predate "Star Wars: Episode III — Revenge of the Sith" by almost 30 years. Yet viewers Sunday — and Lucas himself — noted similarities between the final chapter of his sci-fi saga and our own troubled times.

Cannes audiences made blunt comparisons between "Revenge of the Sith," the story of Anakin Skywalker's fall to the dark side and the rise of an emperor through warmongering, to President Bush's war on terrorism and the invasion of Iraq.

"This is how liberty dies. With thunderous applause," bemoans Padme Amidala (Natalie Portman) as the galactic Senate cheers dictator-in-waiting Palpatine (Ian McDiarmid) while he announces a crusade against the Jedi.

"If you're not with me, then you're my enemy," Hayden Christensen's Anakin (soon to become villain Darth Vader) tells former mentor Obi-Wan Kenobi (Ewan McGregor). The line echoes Mr. Bush's international ultimatum after the Sept. 11 attacks, "Either you are with us, or you are with the terrorists."

"That quote is almost a perfect citation of Bush," said Liam Engle, a 23-year-old French-American aspiring filmmaker. "Plus, you've got a politician trying to increase his power to wage a phony war."

Though the plot was written years ago, "the anti-Bush diatribe is clearly there," Engle said.

At the Cannes premiere on the night of May 15, actors in white stormtrooper costumes paraded up and down the red carpet as guests strolled in, while an orchestra played the "Star Wars" theme.

Lucas said he patterned his story after historical transformations from freedom to fascism, never figuring when he started his prequel trilogy in the late 1990s that current events might parallel his space fantasy.

"As you go through history, I didn't think it was going to get quite this close. So it's just one of those recurring things," Lucas said at a Cannes news conference. "I hope this doesn't come true in our country.

"Maybe the film will waken people to the situation," Lucas joked.

Unlike Moore, whose Cannes visit came off like an anybody-but-Bush campaign stop, Lucas never mentioned the president by name but was eager to speak his mind on U.S. policy in Iraq, careful again to note that he created the story long before the Bush-led occupation there.

"When I wrote it, Iraq didn't exist," Lucas said, laughing.

"We were just funding Saddam Hussein and giving him weapons of mass destruction. We didn't think of him as an enemy at that time. We were going after Iran and using him as our surrogate, just as we were doing in Vietnam. ... The parallels between what we did in Vietnam and what we're doing in Iraq now are unbelievable."

The prequel trilogy is based on a back-story outline Lucas created in the mid-1970s for the original three "Star Wars" movies, so the themes percolated out of the Vietnam War and the Nixon-Watergate era, he said.

Lucas began researching how democracies can turn into dictatorships with full consent of the electorate.

In ancient Rome, "why did the senate after killing Caesar turn around and give the government to his nephew?" Lucas said. "Why did France after they got rid of the king and that whole system turn around and give it to Napoleon? It's the same thing with Germany and Hitler.

"You sort of see these recurring themes where a democracy turns itself into a dictatorship, and it always seems to happen kind of in the same way, with the same kinds of issues, and threats from the outside, needing more control. A democratic body, a senate, not being able to function properly because everybody's squabbling, there's corruption."