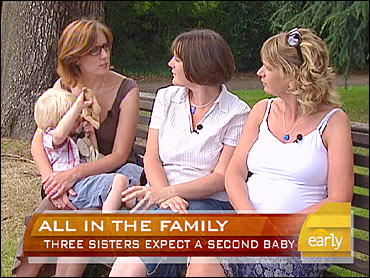 Charlie is the child that might never have been born: his mother, Alex, was left infertile after intensive cervical cancer treatments. So in a huge act of love, Alex's twin Charlotte, and her older sister Helen, joined forces to give Alex the baby she longed for.

Charlotte donated eggs, fertilized with sperm from Alex's husband Shaun. The resulting embryo was implanted in Helen, who acted as a surrogate mother.

When Charlie was born, he was immediately put into Alex's arms. It was an extraordinary gift.

"I'll be honest, I wouldn't do it for anybody else. I did it because it's my sister and I knew how desperate her and Shaun were for a family, I know how much a family means to me, and so it wasn't a hard decision for me to do it," Helen told CBS News correspondent Sheila MacVicar. "And its made much easier by the fact that biologically it's not mine at all."

"It was scary at first because I had to ask, and it's a huge thing, not just, 'Can I have your eggs?', but 'Can I risk your fertility, risk your health, put your family through an awkward stage?', and for Helen, 'Your family are going to have to watch you be pregnant for nine months,'" Alex said.

But the first time went so well, the sisters are doing it again. Helen is pregnant with another egg donated by Charlotte, and due in October.

"We've had a few people come up to us and say 'Is it you, aren't your sisters amazing,'" Alex said. "But what greater expression of love can there be than what they've done for me?"

And though Charlie is so clearly loved by all three, it's also clear that he has just one mother, not three.

"It's so obvious who his mummy is, and he loves his mummy and that's the important thing, we've achieved very happily what we wanted to do," Helen said.

It's an extraordinary story of devotion and giving. MacVicar asked Charlie what he wanted his new sibling to be, and we think he said a sister.