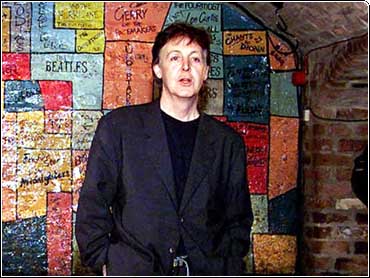 The former Beatle labeled the gig, "the perfect way to rock out the century." And to the 300 lucky fans inside, it certainly was. It was raw rock n' roll the way it used to be, reports CBS News Correspondent Tom Rivers. These were die-hard Beatle fans and for fifty-five minutes, McCartney held them spellbound.

Though the original Cavern was leveled decades ago, the club marks the spot where the Beatles were discovered by their future manager before their rise to super-stardom.

With his early Beatles-era Hofner bass slung over his shoulder, it looked as of Sir Paul had never been away. In fact, he hadn't played the cavern for 36 years. To those inside, the trip down memory lane felt like a night from the distant - but friendly - past, to a time when Beatlemania was at its height.

The low-tech auditorium - a tribute to the music McCartney said transformed the century - stood in stark contrast with a high-tech delivery system. Even as 300 lucky souls crammed into the hot and sweaty cavern, three million others around the world logged on to the live Webcast. The traffic broke an Internet record.

McCartney and his band, including Pink Floyd's Dave Gilmour and Ian Paice from Deep Purple, performed songs by Elvis Presley, Little Richard and Chuck Berry in addition to material from McCartney's new album Run Devil Run. Only one Beatles song -- I Saw Her Standing There - was on the play list.

Among those in the audience Tuesday night were 150 fans who had won their tickets in a nationwide lottery. Outside, an estimated 12,000 people braved freezing weather to watch the show live on a giant video screen in Liverpool's Chavasse Park.

"I am elated," McCartney said after his show. "I cannot think of a better place to be."

Pat Oakes, who worked at the Cavern Club in its heyday, brought her nine-year-old granddaughter, Charlotte, from London.

"It's great to see him back here," Oakes said. "It's just a shame they all split up and it would be lovely to see the remaining Beatles back together.''

Sir Paul may not be a kid anymore, but he proved in one magical moment at the cavern at the end of 1999 that he hasn't lost a step. He also showed the world that simple old rock n' roll still will have a place in the twenty-first century.

It was truly a night to remember, rocking out the old and ringing in the new.