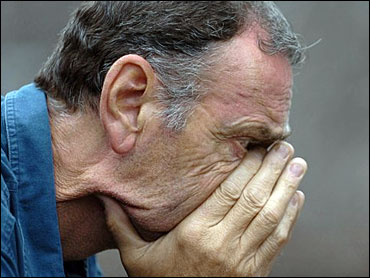 Authorities say a large sinkhole opened in the middle of a house, killing a 27-year-old man who plummeted ten feet and was covered by the rubble.

The two-story home, built in the 1980s, might have been sitting atop a decades-old underground mine, authorities said. Recent rains possibly softened the ground under the home, in an isolated area near Lake Alta, northeast of Sacramento.

"It's unbelievable," Placer County Sheriff's Department spokeswoman Dena Erwin said Sunday. "From the front of the house, it's absolutely normal. Then, in the middle of the house, is this enormous hole."

The victim was on the ground floor about 9:30 p.m. Friday when the concrete foundation near the kitchen gave way, Erwin said.

The man's wife also was in the house at the time and called emergency services. She was uninjured, Erwin said.

Rescuers are having trouble recovering the body because the ground began to shift, creating an unsafe situation for work crews. They still were trying to remove the body on Sunday afternoon, said Erwin, adding that the home has been condemned.

The hole has doubled in size to 30 feet wide and 20 feet deep, and is still growing. Erwin says the hole has grown wider than some of the load-bearing walls of the house.

Authorities declined to release the victim's identity until his body is recovered.