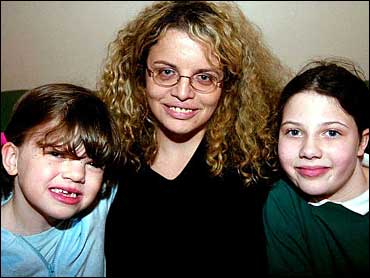 It's not as if single parents don't have enough to worry about.

Ask Dawn Dowouna-Hyde, who spends almost all day studying at a university, hurries to pick up her two kids on her way home, makes supper and helps with their homework.

Then out comes a study from Sweden - the biggest, most convincing ever done on the subject - that says children in one-parent homes are twice as likely as those in two-parent families to develop serious psychiatric problems and addictions later in life.

"It's quite upsetting because it's like we're damned if we do and we're damned if we don't," said Dowouna-Hyde, who took her two daughters and left her husband seven years ago because of domestic violence. "It's going back to 'blame it on the single parents.' I hear that quite a lot."

Yet, even though the challenges of raising children alone are tough, the vast majority of kids do not have such severe problems: Roughly 9 out of 10 teens and young adults don't have addiction or psychiatric problems serious enough for hospitalization.

In addition, "there's huge variation in how well kids do in single-parent families. Don't forget there are kids in two-parent families that do badly, too," said Dr. Tom O'Connor, a child psychiatrist at the Institute of Psychiatry at King's College, London.

Similar risk differences were seen for alcohol problems, and the increased risk for drug addiction was even higher than for other problems.

Because researchers looked only at those hospitalized, experts said many more children suffer emotional problems, though perhaps not so severe.

Experts didn't dispute the findings because the study involved almost 1 million children over nearly a decade. They also said the results were similar to those seen in smaller studies elsewhere, including those in countries much more heterogeneous than Sweden.

But the study did not answer a question that researchers have been chasing for years: What exactly is it about a single-parent home that puts children at higher risk for such problems?

Although there are several theories, none seems to prevail. All seem to explain part of the problem, and it's unclear which factors are most significant.

Experts cite money, the level of hostility between the parents who separate, the quality of the parenting, the timing of divorce, and the extent and quality of the social network, which includes school, friends and adult role models.

The chances of any child developing serious psychiatric problems is very small. In two-parent homes, this study indicated about 1 in 200 boys and 1 in 100 girls would experience problems serious enough to be hospitalized. So a doubling of the risk results is a still small chance of problems. But because so many millions of children live in one-parent families, the numbers can add up.

One in three children in the United States today is born outside marriage, according to government records. And recent estimates suggest that 54 percent of American children will spend some time living apart from one of their parents by the time they are 15.

Global statistics on the prevalence of psychiatric disorders in children in general are fuzzy, says Dr. Myron Belfer, senior adviser for child and adolescent mental health at the World Health Organization.

The study was conducted by researchers from the Swedish National Board of Health and Welfare, Umea University and the Karolinska Institute in Stockholm. The scientists used Swedish national registries - which are famously comprehensive - to track family structures and psychiatric problems in children in the 1990s.

It included 65,085 children living with a single parent - mostly their mothers - and 921,257 living with two parents. It did not distinguish between widows and divorcees or parents who had never married. It also did not gather details of how bitter the divorces were or at what age the children were when the families separated.

"You need to be careful in interpreting the data because you don't have the inner family details," said Dr. Per-Anders Rydelius, a professor of child and adolescent psychiatry at the Karolinska Institute who was not involved with the study.

"This is really a complex situation and you cannot put it just on the single-parent family. There are many other complex factors that we have a hint of but no detailed information on," Rydelius said.

Most say it matters how the single-parent home came to be - whether by the death of a parent or divorce, by unwanted teenage pregnancy or by unconflicted choice, whether the divorce was bitter, whether there was violence or alcohol abuse in the home.

One view is that financial hardship explains a lot of why some children have problems while others turn out fine.

However, the fact that children in families with stepparents often fare worse than those in two-parent biological families suggests that while income is important, it is not the entire story, says Sara McLanahan, a professor of sociology and director of the Center for Research on Child Wellbeing at Princeton University.

Also, countries often differ dramatically in the amount of financial help they give single mothers, which means that if money were a big factor, there should be substantial differences in the children's emotional well-being in the various countries.

But studies have shown there is not much difference.

"It's part money, part the quality of the parenting, part, maybe, their general access to support," McLanahan said.

When children lose their father, they may also lose the support that comes from his side of the family - his relatives and friends and financial resources.

That would indicate there is something inherent in single parenthood that causes the problems. But why do most kids turn out fine?

"Some of these families do a better job of making up for these resource losses. They build more connections, they have money, they go to school, the father pays child support, maybe the grandparents on the father's side do help or maybe the mother has a very extensive support system," McLanahan suggested.

Experts agree that the quality of parenting is a major issue and that the stress that comes with a breakup compromises the ability to be a good parent.

"There's clearly a strong association between the quality of parenting and the child's adjustment, and that's true regardless of the situation you're in," said London's O'Connor. "We wouldn't want to say that good parenting is the magic pill, but what those psychological studies of hundreds, instead of tens of thousands, have shown is that you may get increased leverage by trying to intervene" with parenting coaching.

Another popular explanation is the intensity of the conflict between the parents. Research indicates it's better for a child to be with a single parent than in the midst of domestic violence or two parents who constantly fight.

Parental conflict explains many of the problems in children of two-parent families, said Felton Earls, a professor human behavior and development at Harvard Medical School.

Another common theory is that the problems can be explained because the kind of people who divorce or never marry are different from those who marry once and stay married.

"A radical view would be that the divorce is a sort of (red herring). That the reason why kids of divorced families have higher rates of behavior and emotional difficulties has to do with the fact that the parents themselves have higher rates of behavioral or emotional difficulties that led to getting divorced," O'Connor said. "That's a perfectly plausible, but a bit extreme, view of the matter."

But for all the theorizing, Dowouna-Hyde, who is now studying to be a social worker, is convinced that single parents can overcome the odds.

"My belief is parenting skills are one of the main solutions here. It is hard being a single parent because you've got to take on dual roles, but as long as the children know where they stand and as long as they know they are loved, it's probably OK," she said. "I try to tell my girls every day that I love them."