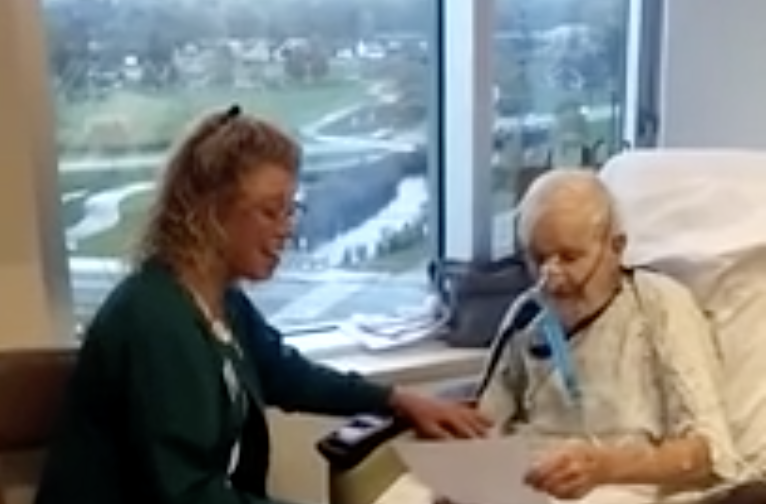 A singing nurse at Bronson Hospital in Kalamazoo, Michigan, helped light up a man's life in a remarkable way. When nurse Brenda Buurstra learned one of her patients liked the song "You Light Up My Life" by Debby Boone, she started to sing it to him. One week later, he was discharged from hospice care.

Buurstra has been lighting up the lives of patients for more than a decade. "I have sung to patients for 14 years, and this is just the first time I got caught," Buurstra told CBS affiliate WWMT. She was "caught" by Roberta Lytle, whose dad was admitted to the hospital last month.

Lytle's dad Robert Olson was having trouble breathing. She said her dad has always been strong -- he didn't retire until he was 85 years old. But this time, the family knew it was different, and he was put in hospice care.

"He has heart problems but because of his age, they can't put a pacemaker in," Lytle told WMMT. "He had an episode at the house, and he couldn't breathe. So they took him to Bronson Hospital. He was there about a week. We did not think he was coming home this time."

Lytle said it was tough for her father to even speak just a few words at a time. Then Buurstra walked in. Not only did the nurse get Olson speaking, but singing.

"We were watching a show on Pat Boone, and he told the nurse 'I don't like him, but I like a song that his daughter sings.' And this lady just starts singing," Lytle said of Buurstra. "And I'm just blown away. Because the woman's got a voice."

"He said, 'My favorite song is "You Light Up My Life".' And I just started singing it," Buurstra told the station.

She didn't know all the words, so she promised to print out the lyrics and come back the next day to sing to some more. Sure enough, she did. "He was beaming," Buurstra said. "Even through his little venting mask he was wearing, his eyes lit up. His whole countenance changed, and he had a big smile. You could tell that song lit him up. Literally 'You Light Up My Life,' that song really just lit him up. You could tell it touched his heart."

Lytle took a video of her dad singing with the nurse and posted the heartwarming moment on YouTube. "If you listen to the video, you can hear him trying to sing at the very end. But it changed him. It was like he knew he was going to go home," Lytle said.

Just one week later, Olson had regained enough strength to be discharged from the hospital. Once in hospice care, he was now going home.

Buurstra said she's been singing to patients since she began her medical career. She started signing 17 years ago in church.

"To make that awful hospital stay they're going through just a little bit better, a little bit brighter," Buurstra said. "I wanted to be on a team of positive people, and that's what we have here at Bronson. I'm not the only nurse who goes above and beyond at Bronson. This is what we do every day."

As the song goes, she lit up his life and she gave him hope to carry on. Thanks to nurse Brenda Buurstra, Robert Olson's spirits were lifted, and he was able to go home.