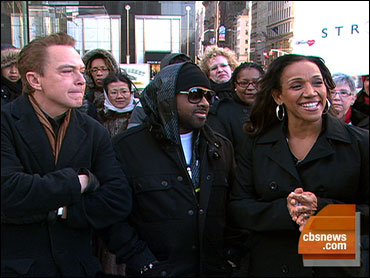 Early Show "Singing Family Face Off" is kicking into high gear. The competition will take place over the next three weeks and the judges are some of the biggest names in music.

The celebrity judges stopped by The Early Show to chat with Early Show co-anchors Julie Chen and Harry Smith.

The first judge is David Cassidy. He played teen idol Keith Partridge with that famous singing family from the '70s, "The Partridge Family."

Judge number two is Kathy Sledge (a.k.a. Sister Sledge). Along with her sisters, she first reached the top of the charts with the number one hit, "We Are Family."

Judge number three is Jermaine Dupri. He has produced some of the biggest names in the recording industry - from Usher to Mariah Carey. And when he was just 19 years old, Kriss Kross.

"Describe the ups and downs of working with family?" Chen asked.

"Well, I had the pleasure when I was about 19 of working with my stepmother, who was from a totally different genre where I was - Shirley Jones. Correct, Academy Award winner," Cassidy said. "And being on television, I was the only guy that was actually singing and playing. As you probably remember, or those of you who don't, it was a while ago. I had been playing in rock 'n roll bands and garage bands and stuff, but I was an actor and got cast as an actor. So, she was incredibly supportive. She had been on the cover of 'Life' magazine and everything when she was 19."

Cassidy has just finished working for the first time with his brother, Patrick. The two have a new series on another network and are still playing music and singing.

"How was it for you? Working with family?" Smith asked Sledge.

"The downs first or the ups?" Sledge joked. "Really, 'We Are Family,' the song was written about us. And what can I say? I love my sisters."

"How psyched are you for this competition?" Smith then asked Dupri.

"I mean, I want to see it. I work with kids all the time. I'll be the one that's a little tough on them," Dupri said.

"Do you think there's real talent out there?" Smith asked.

"Especially with families because I think they're really close family harmonies that you'll hear. This is going to be exciting. There's a lot of talent," Sledge said.

"And there's a lot of ways now for all of us to be able to see what talent is out there by YouTube and everything else. There's some great acts that are broken that way. I just saw a little tease of the four African American girls, who are fantastic. I know there's a lot of talent out there," Cassidy said.

The Early Show searched for months, going through hundreds of videos submitted by family bands, then narrowed the field to six finalists.

On Wednesday, Feb. 25, the competition begins with live performances in The Early Show studio. Vote for your favorite online each week! The winning family will be announced April 1.