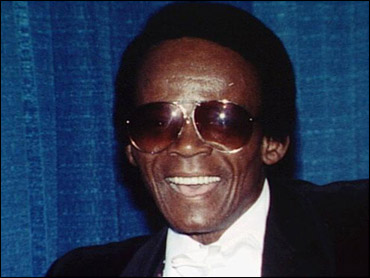 Hank Ballard, the singer and songwriter whose hit "The Twist" ushered a nationwide dance craze in the 1960s, has died.

Ballard, who was suffering from throat cancer, died Sunday at his home, friends said. Friend and caretaker Anna Ayala said Ballard's birth records indicate he was born in 1927, but biographical information lists his birthdate as 1936.

"He was just a very good man and loved by so many people," Ayala said.

In 1958, Ballard wrote and recorded "The Twist," but it was only released on the "B" side of a record.

One year later, Chubby Checker debuted his own version of "The Twist" on Dick Clark's Philadelphia television show.

It soon topped the charts and launched a dance craze that prompted the creation of other Twist songs, including "Twist and Shout" by the Isley Brothers and "Twistin' the Night Away" by Sam Cooke.

Ballard was inducted into the Rock and Roll Hall of Fame in 1990.

In a 1996 interview, he described music as his medicine.

Ballard was discovered in the early 1950s by writer-producer Johnny Otis. He was lead singer for the Royals, which changed its name to the Midnighters.

Ballard's songs were sometimes banned from 1950s radio for their sexually suggestive lyrics.

By the early 1960s, he had charted 22 singles on the rhythm and blues charts, including "Work with Me Annie" - the biggest R&B hit of 1954, selling more than 1 million copies. The song was part of a well-known trilogy of risque R&B numbers that included "Annie Had a Baby" and "Annie's Aunt Fannie."

"He was an all-around entertainer. He was dynamite on stage," said friend and business associate Chuck Rubin.

Ballard said his first inspiration to be a singer was Gene Autry.

"He had a beautiful voice," Ballard said. "I used to try to emulate him, you know. I had my little toy guns. He was not my favorite fighter, though. He was my favorite singer. He was too handsome to be a fighter."

Ballard, who was born John H. Kendricks in Detroit, grew up singing in church in Bessemer, Ala. At 15, he moved back to Detroit and set out to form a doo wop group while working on the Ford Motor Co. assembly line.