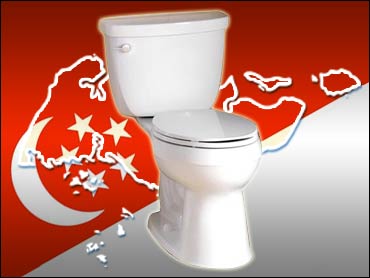 When finicky tourists in Singapore hear nature's call, they'll know where to go.

The city-state is publishing maps pinpointing its 500 cleanest public toilets in its drive to wipe dirty lavatories off the face of the island, an official said Thursday.

The toilet maps will indicate the cleanest and best-equipped restrooms for the benefit of tourists and shoppers, said Jack Sim, a founding member of the Singapore-based World Toilet Organization and president of the Restroom Association of Singapore.

The WTO Web site offers a downloadable song written for the group, "Secret Garden," sung by a youth choir.

"Secret garden out in the open,
Somewhere my heart runs free,
Deep down burning, forever yearning,
Always there."
The site solicits other songs about toilets, in the hopes of putting together album collections of them.

The maps will be available free at the international airport and information counters by August, and shopping malls whose restrooms don't yet qualify will be encouraged to upgrade so that they can be included, Sims said.

"If retail operators could use this as a competitive tool, it would help raise the standards of toilets in the country," Sim said. "Shopping centers with well-facilitated loos will win the trust of the shoppers."