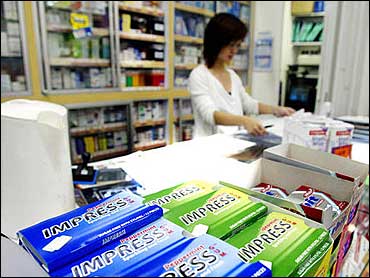 Ultra-tidy Singapore is lifting its notorious ban on chewing gum after 12 long years — but getting a pack won't be entirely hassle-free.

Wrigley's Orbit gum has just started appearing in pharmacies along with several other brands. Before Singaporeans even think about unwrapping a pack, however, they must submit their names and ID card numbers. If they don't, pharmacists who sell them gum could be jailed up to two years and fined $2,940.

The decision comes after new trade talks that included pressure from Rep. Philip Crane, R-Ill., whose state is home to gum giant Wrigley Co. Singapore has also been at pains in recent years to shed its "nanny state" image and promote itself as a hip, cosmopolitan hub for media and the arts in Asia.

But that has proven a difficult task in a country where films and television shows are often censored, home satellite TV antennae are banned and various books, magazines and even popular songs are outlawed. Fines are levied for spitting or failing to flush public toilets.

Singaporeans, many of whom have long derided the chewing gum ban, seemed unimpressed by the change.

"It's ridiculous that it's easier for 16-year-olds to visit prostitutes than it is to get chewing gum here," said Fayen Wong, a 22-year old college student. Prostitution is legal in parts of Singapore — and no registration is required.

This Southeast Asian city-state, known for its immaculate streets, outlawed the manufacture, import and sale of chewing gum in 1992 after the country's founding father, Lee Kuan Yew, complained that it was fouling streets, buildings, buses and subway trains.

Lee, 80, stepped down as prime minister in 1990 but still wields considerable influence.

Gum became a sticking point months ago in Singapore's free trade talks with Washington, when Crane pressed the issue.

Singapore compromised, agreeing to allow only the sale of "therapeutic" gum in pharmacies, and the free trade pact took effect Jan. 1.

The Health Sciences Authority, responding to questions from The Associated Press, said it has allowed the sale of 19 "medicinal" and "dental" gum products.

Orbit, which Wrigleys touts as good for teeth, hit pharmacy shelves just days ago. Pfizer Inc.'s Nicorette, a nicotine gum meant to help smokers kick their addiction, has been available since March.

"Why would I go through the trouble of getting nicotine gum if I can buy a pack of cigarettes without giving my name?" said Wong. "I don't think the new rules will help smokers to quit."

The Straits Times newspaper, which has close government ties, reported Sunday that street cleaners have already complained about the return of spent wads of chewing gum to their once pristine pavement.

Critics of restrictions have often cited the chewing gum ban as an example of the government's excesses.

But the partial legalization of gum is "really a non-event," said Koh Beng Liang, 25, a research engineer who said he hasn't yet bothered having a legal chew.

"Singaporeans will quickly realize it if the so-called loosening up is for foreign image, and not real change," Koh said.