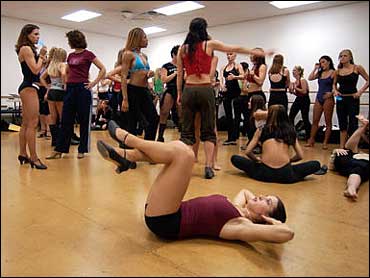 For years, the Treasure Island hotel-casino, with its pyrotechnic pirate show and skull-and-bones marquee, carried a reputation as a Disney-esque destination for families.

But the show, like Las Vegas, is sailing off into another, altogether naughtier direction.

Casino operators will replace the popular family attraction with the "Sirens of TI" - sexy vamps who duel pirates in what Treasure Island calls a "sensual modern interpretation" of the old "Battle of Buccaneer Bay."

Treasure Island is not alone. Other Las Vegas hotels have added swinging adult clubs and risqué revues to compete with a growing number of megasize strip clubs that are siphoning visitors and dollars away.

The recently opened $30 million Sapphire Gentlemen's Club sits on seven acres and boasts marble floors and plasma televisions. It has 10 skyboxes that allow customers a sweeping view of about 40,000-square feet devoted to topless dancing.

The Las Vegas Convention and Visitors Authority is airing four national commercials tantalizing would-be visitors with the not-so-subtle message that anything goes in Sin City.

"It's becoming a major theme. All of Vegas is grabbing onto the sex thing," said University of Nevada at Las Vegas gambling professor Bill Thompson, who doesn't approve of the trend. "It could evolve into something that's ugly."

Las Vegas has never been Disneyland. Gamblers, mobsters and topless showgirls earned the city its reputation. But in recent years, a more family-friendly strain emerged.

Circus-Circus gave the kids a place to play games while mom fed the slots and dad gambled at blackjack. Families found roller coasters, arcades, celebrity chefs, art galleries, even an amusement park amid the lights and lures.

The trend toward cool and hip has paradoxically fueled the city's renewed interest in the lewd and lascivious: With more single men in their 20s and 30s swinging into town, there is greater demand for clubs where waitresses wear lingerie.

One of the hottest spots in town - the Palms - hosts MTV shows and offers hotel rooms with strippers' poles. Caesars Palace has designated its Venus pool for topless sunbathing.

Treasure Island is catching the wave in recasting itself as "TI" and spicing up the pirate extravaganza.

Treasure Island President Scott Sibella described the old show, which attracts 4.5 million people a year, as "a little tired," and in need of a swashbuckling, $2 million facelift. The original show has been around since the hotel opened in 1993.

It launched a nationwide casting call, looking for women who are "part muse, part pirate, part wench, part temptress - to play prominent roles in the new Battle of Buccaneer Bay," according to a since-revised statement.

Along with the revamped show scheduled to open in October, Treasure Island's skull-and-bones marquee on the Strip is out; a new stylish, neon "TI" logo advertisement is in.

"We are not changing the name," Sibella said. "It will always be Treasure Island. What we're trying to do is have a trendier and sexier name."

Sibella said the latest changes coincide with the casino's internal evolution, where most traces of pirates are long gone.

The casino has removed a 25,000-square-foot arcade and inserted a much smaller one. Where once Treasure Island visitors could down enemy fighters in video games, now there are a few more places to down drinks, such as the Mist night club.

Alan Feldman, a spokesman for MGM Mirage, which operates Treasure Island, said the hotel's transformation should help sink unprofitable rumors that it was built for families.

A convention and visitors authority study shows only 10 percent of the people who visited Las Vegas in 2002 were traveling with people younger than 21.

"The notion of Las Vegas being a family place was mythical," Feldman said. "What Las Vegas has always been is bringing out the kid in the adult, not asking adults to bring their kids."

But Thompson points to MGM Grand's former amusement park as evidence the company intended to attract adults and their children, and said Treasure Island should be no different.

"Treasure Island was a designated property for children," Thompson said. "Feldman is spinning himself silly on this issue."

Whether the public gives the new image the heave-ho remains to be seen.

On a recent weekday, dozens of children and parents gathered to see the free pirate spectacle. Many had already gotten word that the sexy sirens were on their way. Not all were happy about it.

"I'd rather see it stay a family thing," said 40-year-old Heidi Jaggi, a mother of five from Lyman, Wyo. "I would rather not see scantily dressed women."
By Adam Goldman