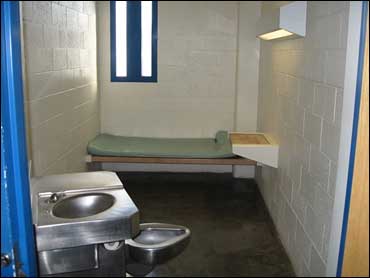 O.J. Simpson is going to have to get used to his strict routine and sparse accommodations if he ends up going to trial for the alleged attempted robbery of sports memorabilia and continues to be held without bail.

The Las Vegas police department released photos of Simpson's quarters to The ShowBuzz. He is being held at the Clark County Detention Center in Las Vegas where 3,000 inmates are imprisoned.

Simpson, who is classified as a protective custody/isolation inmate, is being kept apart from the general inmate population. He stays in his cell while the other inmates have free time. When they are on lock down, Simpson comes out for his free time. He will receive three to four hours of free time each day.

Simpson can visit the recreation room in his free time and is also allowed two books or magazines in his cell and up to five religious books.

According to the police department, Simpson has made only one request. He asked for reading glasses. The detention center's religious services minister gave him two pairs of reading glasses, a Bible, and the book "A Purpose Driven Life."

The police say Simpson continues to be cooperative and is following the rules. He has had five attorney visits -- three from a private attorney and two from the Public Defenders Office, the press release said.

2Like all the other inmates Simpson will wear standard issued imamate clothing.

His cell is 7 feet-by-14 feet and has a bunk, toilet sink and desk. A window lets in sunlight and he also has a fluorescent light.

Each day Simpson will receive three meals. Breakfast is served bright and early at 4 a.m. He'll have a cup of toasted oats, sausage, hash, fresh fruit, bread with margarine, 2 percent milk and coffee. A typical lunch, served at 10 a.m., consists of spaghetti with sauce, a meat patty, green beans, two slices of white bread, one cookie and a fruit drink. Dinner, served at 4 p.m., will be enchilada casserole, Spanish rice, garden salad with dressing, two slices of bread, margarine, marble cake and a fruit drink.