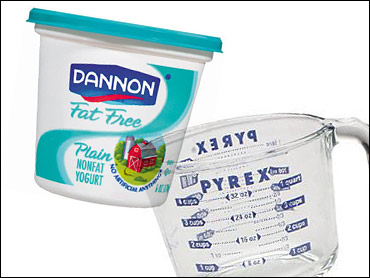 Sometimes you simply don't have the tool you need to get a culinary task accomplished in the kitchen.

Maybe it's a tool you never bought because you only use it once a year - if that.

Maybe you never bought the item because it takes up too much space in your small kitchen.

Maybe it's lost, broken, borrowed by a neighbor, or buried in your child's sandbox.

Whatever the case, Real Simple magazine's Kris Connell has five "new tricks for old tools" to repurpose other things in your kitchen in a jam.

MEASURING CUPS
Even the casual cook probably has a small measuring cup in the kitchen. However, not everyone has a large, four-cup measure. Here's where that quart container of yogurt or the quart of potato salad you bought comes in handy. A quart container, filled almost to the rim, holds four cups. If your one-cup measure has gone missing, use an 8-oz container of sour cream or yogurt instead. Use this Band-Aid solution for things like pancakes, rice or soups, but not for serious baking projects (such as cakes), which demand exact measurements.

CAKE DOME
Can you count the number of cakes you've baked on one hand? If you're a part of this large club, chances are good you don't own a cake dome. But at some point you're going to want to preserve a beautiful frosting job or transport a cake. An amazingly simple solution: invert the outer bowl of your salad spinner over the cake.

GRIDDLE
It's fine to make pancakes or scrambled eggs in a skillet when you're feeding two or three people. But when you're making breakfast for a crowd, you need something larger. If you don't have a griddle, pull out your roasting pan. Only heavy metal pans need apply; most earthenware and glass pans aren't stovetop safe. Set your roaster across a couple of burners and get started. It's smart to rotate the roasting pan periodically to help better distribute the heat evenly.

EGG POACHER
No poacher? No problem. Ramekins and a skillet will suffice. Drop a teaspoon of butter into the bottom of each ramekin and place the desired number of ramekins in a skillet. Add about a half-inch of water, bring to a simmer and crack eggs into the ramekins. Cover with a lid or foil and simmer until the eggs are done. Even if you have a poacher this tip can come in handy - my poacher only prepares four eggs but sometimes I have five or six people for breakfast. Pull out a large skillet, and cook everybody's meal at once.

ROLLING PIN
Let's face it, not many people have time to roll out cookies or piecrusts these days. However, when you get the urge to make mom's Thanksgiving pie, you're going to need a rolling pin. If you don't have one, a wine bottle - full or empty - is a good alternative. Place your pasty between sheets of plastic wrap or wax paper to prevent it from sticking. Then, press down firmly on the bottle with one hand while grabbing the neck of the bottle with the other hand to steer.

INDISPENSABLE TOOLS
Of course, for some tools, you should accept no substitutions. Nothing can replace essential tools such as a wooden spoon, slotted spoon, tongs or flexible spatula. Having quality versions of these items in the kitchen makes cooking much easier and enjoyable. The good news is that you don't have to spend much money on such indispensables and they don't take up much space.