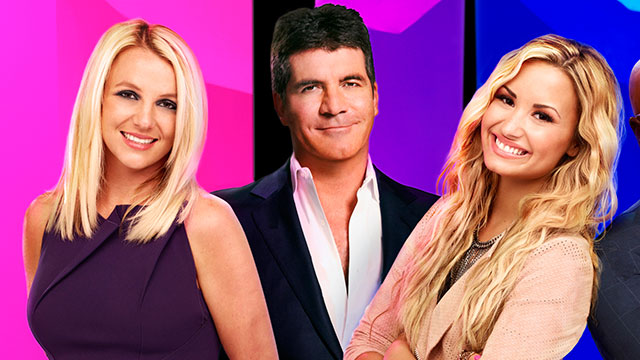 On The X Factor last season, Nicole Scherzinger stepped out from behind the judging table and took center stage for a special performance. Simon Cowell hopes Britney Spears and Demi Lovato will follow suit and perhaps team up for a collaboration.

"I want to see a Demi/Britney duet! Why not?," he tells ETonline. Demi, who's excited for audiences to see Britney's personality "shine," would certainly pursue the opportunity.

The show is just days away from premiering, but noticeably missing is a host. Simon says fans will have to hold tight a bit longer because the audition shows don't have an emcee or voiceover. Those initial episodes rely on the "contestants to tell the story themselves." He's excited to show more behind-the-scenes reality than ever before, admitting, "This is the first time I genuinely know what it's like to be a contestant on the show."

The X Factor has screen tested a lot of potential hosts and Simon teases that a headline-making announcement could be delivered within the "next seven days... My gut feeling is we'll go with a boy and a girl who don't have hosting experience," he says. "It's just too boring as Ryan [Seacrest] demonstrated for one person."

Exuding his signature confidence, Simon calls The Voice's expansion to a third night, thus competing in the same timeslot as The X Factor, "tactical" because "[NBC doesn't] want people to see this first episode [of The X Factor]. I hope it backfires on them."

The snarky Brit has company in the feisty category from an unlikely source, a Brit of another variety, Miss Britney Spears. In describing the pop princess' style, he says, "You know if you buy a dog, you expect it to lick you and then it bites you. She just wouldn't say yes for people to like her."

Demi and Britney have made it difficult for the often-dominating Simon to control the reins. "They're like having two racehorses who are very talented, but difficult to control," he analogizes. "I have a habit of working with annoying people. Demi brought that again this year in bucketloads."

As for the talent, Simon expects the group and 12-17-year-old categories to prove strong. Last year, Melanie Amaro was the winner that almost never was because Simon cut her in an earlier round. He personally travelled to her Florida home to reinstate her candidacy on the show after realizing the detrimental mistake he had made. "Probably every judge is going to make the wrong decision or leave somebody out. I don't know how we're going to do it," he says, baffled by the dilemma that may repeat itself.