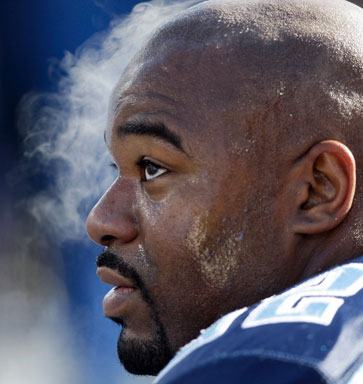 The 28-year-old NFL pro, who was considered one of football's best defensive players, is being sued for $10M by dancer Silvia Mena for allegedly impregnating her and then abandoning her.

The New York Post reports that the "Salma Hayek look-alike," who's nearly four months pregnant, says she met the 6-foot-6, 350-pound defensive lineman in Miami late last year during Super Bowl week and continued their romance at his Tennessee home.=>

Mena, 25, claims Haynesworth promised her he would provide emotional and financial support, but dumped her after learning she was expecting in late February.

But did Haynesworth really avoid his pregnant ex-lover?

According to the court papers filed by Mena, he did - and he has allegedly refused to talk to her since late March or give her any money toward her medical bills, the New York Post also reports.

"It is very stressful, I cry all the time," Mena said.

Haynesworth isn't broke by any means. In fact, he is doing really well for himself - he signed a $100 million contract with the Redskins last year.

Haynesworth's agent declined to comment on the newspaper report.