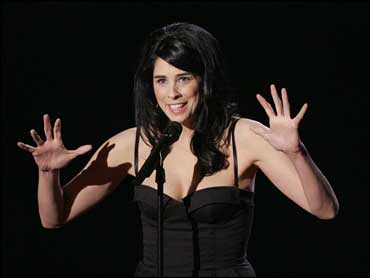 The MTV Movie Awards were aired live and had the often-outrageous comedian Sarah Silverman as the host.

So it was no surprise when Silverman opened her show with a monologue that skewered Paris Hilton and Lindsay Lohan.

After off-color jokes about Jack Nicholson and Tobey Maguire, she turned her venom on Lohan.

"I feel bad for Lindsay Lohan, obviously," she said. "She needs structure, she needs a father figure. She needs someone who will take the time to tell her that she is a rude little pig."

Lohan, who checked herself into rehab last week, wasn't in the audience. But Silverman's next victim, Paris Hilton, who is due in jail Tuesday, was present.

"In a couple of days, Paris Hilton is going to jail," said Silverman, as the crowd erupted into applause. The camera immediately cut to Hilton in the audience, who was smiling and looked like she was trying to brace herself for what the comedian would say next.

Silverman followed with a crude joke at Hilton's expense, and when the camera panned back to the heiress, she was not smiling.

"Wow, why do I feel dirty?" Silverman said.

2Nicholson made a rambling expletive filled speech accepting his best villain award for his work in "The Departed."

As the actor was about to begin speaking, an audience member yelled out "I love you, Jack!"

"I don't give a [expletive]," he responded, "that's how a villain feels about it. But, sir, I appreciate it. I love you too."

"Who I really want to thank is this: the American fighting men and women and our allies," Nicholson continued, before thanking his "The Departed" co-stars.

The fight prize went to Gerard Butler, who battled "The Uber Immortal" in the epic "300." Will Ferrell and Sacha Baron Cohen won best kiss for their smooch in "Talladega Nights: The Ballad of Ricky Bobby." They shared a long, passionate kiss — culminating in a roll-around-on-the-floor makeout session — as they claimed their awards.

Cohen also won a Golden Popcorn for best comedic performance for his role in "Borat: Cultural Learnings of America for Make Benefit Glorious Nation of Kazakhstan."

"Unfortunately, Borat can't be here tonight," Cohen joked. "He's been feeling the pressures of fame and had to check himself into rehab."

The live program, held at the Gibson Amphitheater, was punctuated by a performance by Rihanna and Jay Z, who paired up on her new song "Umbrella" and soul singer Amy Winehouse who performed her timely "Rehab."

Will Smith's 9-year-old son, Jaden Smith, claimed the breakthrough performance prize for his role opposite his father in "The Pursuit of Happyness." He accepted his award by video from Toronto with his dad by his side and his mom behind the camera.

"Pirates of the Caribbean" beat out "Blades of Glory," "The Devil Wears Prada," "Little Miss Sunshine," and "Borat" for best movie.

Product placement was everywhere at the awards, beginning with the pre-show. Cars from the upcoming film "Transformers" were on the red carpet, as were many of the film's stars. The movie's trailer and a behind-the-scenes segment on the making of the film were shown in between live interviews.

During the show, a dirty mouth award was handed out in a segment hosted by the actress in the Orbit dirty mouth chewing gum ads.

Even Mike Myers, who won an MTV Generations award for career achievement, poked fun at the ever-present reminders of the show's sponsors by including a plug for Pontiac in his acceptance speech.

"I want to thank my parents for encouraging me to never ever sell out," he said. "I'd also like to thank the fantastic new Pontiac Latera, a great sedan for a great price."

After turning to a second camera to perform his faux ad, Myers returned to his acknowledgments.

"I want to thank my fans," he said. "Thank you very much for coming to my movies. You are my boss and I never forget that."