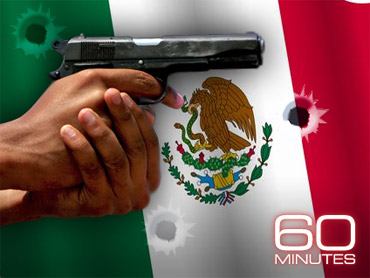 In the past four and a half years, nearly 40,000 people have been killed in Mexico's battle against powerful drug cartels. The violence and corruption is now appearing in places that would have been unthinkable just a few years ago: places like Santiago, a quaint tourist town just a few hours from the U.S. border.

Last August, Santiago's mayor, Edelmiro Cavazos, was kidnapped and killed. To understand what's happening in Mexico, you need to understand what happened in Santiago. As we first told you in January, there and elsewhere around the country, drug cartels armed with guns and cash are forcing a choice on politicians and law enforcement. That choice - as beleaguered Mexicans put it - is between silver or lead: take a bribe or a bullet.

Veronica Cavazos and her husband, Edelmiro, were enjoying a good life, raising three children. He was a successful lawyer with a family run real estate business. Then, in November 2009, at the age of 38, Cavazos was elected mayor of Santiago, a picturesque town where he and his wife grew up.

Asked if she thinks her husband was born to be mayor, Cavazos told "60 Minutes" correspondent Byron Pitts, "Probably. He had this special light, this special feeling of helping people since he was a kid."

But she was worried. "It was a dangerous time to be the mayor, in my opinion," Cavazos told Pitts.

"He was well known. You all were comfortable financially, so why do this?" Pitts asked.

"And you know what his answer was? There is something I can do to help my town, to help my people. And that's the way I'll do it," she replied.

Cavazos was eager and everywhere. He could be found with a smile at civic presentations and at every improvement project.

Cavazos told Pitts her husband had no apprehension about the job. "He was a dreamer, I think."

"A dreamer, your husband? What did he dream for Santiago?" Pitts asked.

"A perfect place for his kids," she replied.

Santiago dates back to the 1600s. Its history and natural setting make it a popular tourist destination. But beneath the postcard appearance is another Santiago, a place important to drug traffickers.

The town straddles a major highway from the drug producing regions of southern Mexico and South America. Controlling Santiago makes it easier to move shipments north to Monterrey. From there, the marijuana, cocaine, heroin and methamphetamines are shipped to cities on the border - three hours away - and smuggled into the United States.

"So from that place, you can go anywhere in the border," Ramon Garza, who has been an investigative journalist in Mexico for 35 years, explained.

"So in many ways, the drug world intersects at Santiago?" Pitts asked.

Garza says Santiago became a safe haven for wealthy drug cartel bosses who blended in with the town's other wealthy residents. "It's a place where you can hide your activities because it's a place for tourism, for nice homes, for weekends," he explained.

And for years, the drug trafficking organization in control of the region - including Monterrey and Santiago - was the Gulf Cartel. Their enforcers: the Zetas, a ruthless gang that started with former Army officers from Mexico's elite special forces.

According to Garza, they were originally trained to go after the cartels, but now are part of it. "They became the Army for the cartels," he said.

In February 2010, only three months after becoming mayor, Cavazos was caught in a feud when the two cartels split. By then, many of Santiago's police were on the payroll for one of the cartels. Cavazos later disciplined some of the officers for extortion.

"So, Cavazos thought he was in control of everything," Pitts remarked.

"He wanted to be in control of everything," Garza said.

"He knew that he was not in control because I had a chance to talk to him several months before his killing. He was worried of the police department," Garza said.

According to Garza, Cavazos was worried because of the corruption. "He didn't know exactly who do they work for," he explained.

"And he's not willing to look the other way," Pitts remarked.

"He wanted the police department to be the cleanest possible and not to be involved with the group of cartels. That's what he wanted," Garza said.

"And that was dangerous, to want that," Pitts said.

"Well, because at that moment, the police department didn't belong exactly to the mayor or to the county," Garza said.

Their uniform may have said "Santiago Police Department," but Garza said, "In reality, they were working for the cartels."

Mexico's four and a half year war against drug trafficking has led to chaos and bloodshed. Many of the nearly 40,000 drug related deaths are due to the criminals killing each other. But not always.

If Cavazos was worried, he never told his family.

Last August 15, the mayor was in Santiago's town square celebrating International Youth Day. It was the last time townspeople would see him alive. With his family visiting relatives in Texas, Cavazos went home to an empty house. A security camera captured what happened next.

The video shows the police officer who guarded the house at night walking towards an approaching line of cars. When they pulled up to the front, armed men got out. Another camera caught the gunmen threatening Cavazos at the door. Moments later, he was pushed into the back seat of the lead vehicle. The police guard walked to the car behind and got inside. In less than three minutes the kidnapping was over.

"The surveillance camera at his house, how important was that to your investigation?" Pitts asked Alejandro Garza y Garza, who when we met him was the attorney general for the state of Nuevo Leon, the lead agency in the Cavazos investigation.

Garza y Garza says when the police guard was found the next morning, he claimed he was also a victim. "And he says he has been kidnapped with the mayor," he explained.

But the video, Garza y Garza says, showed the guard had not been kidnapped.

At the Cavazos home, family waited hours by the phone for a ransom demand. None was made.

"When I saw that this wasn't for money, I suspected that this wouldn't have a happy ending. Because he loved his town so much. And since beginning, he wanted to do things right," Veronica Cavazos said.

Two days after he was kidnapped, the body of Edelmiro Cavazos was found dumped by the side of a road in Santiago.

"Were they trying to send a message in the way in which they killed him, in the place in which they dumped his body?" Pitts asked Attorney General Garza y Garza.

Santiago was stunned when state investigators arrested six of the town's police officers for their alleged role in his kidnapping and murder, including, the man assigned to protect the Cavazos home. The state's case against the officers rests heavily on their confessions.

"We have testimony of six or seven policemen that say they thought he was working for the other cartel. Mayor Cavazos was against them. So that's why they kill him," Garza y Garza said.

"When they captured some of the persons that were involved, they said that to the authorities. He didn't want us to do our job. So, he was like a rock in the way, and we just took him away," Veronica Cavazos said.

Asked what she means by a "rock in the way," she told Pitts, "For them. For the rest of the town, and for me, he was our light."

By week's end, the people of Santiago were back in the town square to pay their final respects to the mayor. Earlier, his wife Veronica had bid a private farewell.

"I thank him. I thank him," she told Pitts. "For all the happy moments we lived together. For my three kids. For letting me being a witness of all the good things he made through life."

Santiago today is sad and fearful, and tourists are staying away. Journalist Ramon Garza says another casualty of the drug war is trust.

Taking money from the drug cartels has been an easy choice for many police officers, with starting salaries at only $500 a month.

Jorge Domene, director of public security in the state of Nuevo Leon, told Pitts the officers are easily corrupted, since the cartels pay much more than the police force.

How much more? "Double," he explained.

Jorge Domene says that, for now, the drug cartels hold the upper hand with both silver and lead.

"There's no police in Mexico that can fight the cartels in terms of the level of equipment they have," he explained.

Asked what kind of equipment a police officer in Santiago would have, Domene said, "A pistol. That's it."

But when asked how the cartels are armed, Domene said, "You name it. Whatever comes to your mind, they have it. AK-47, AR 15."

"So it sounds like local police are bringing a pocket knife to a gunfight?" Pitts asked.

Domene is directing a new effort to eliminate all local police departments in Nuevo Leon, including Santiago's. In their place would be a state police force that is better trained, better equipped and, even more important, better paid. Professionals, he hopes, that won't be corrupted.

"In my opinion, my experience is a point in time that is not more money. It's your beliefs, your principles," Domene said.

Three months after his death, a Mass was held to remember Edelmiro Cavazos. He was one of 14 mayors murdered in Mexico in just the past year. In places where the cartels are in control, being a public figure means being a target.

No one knows that better than Attorney General Alejandro Garza y Garza. His own brother, one of the state's top criminal investigators, was gunned down by a cartel four years ago.

"We're in a war, all Mexico is in a war against the cartels," Garza y Garza said. "But in this war, the bad guys, they don't have any rules."