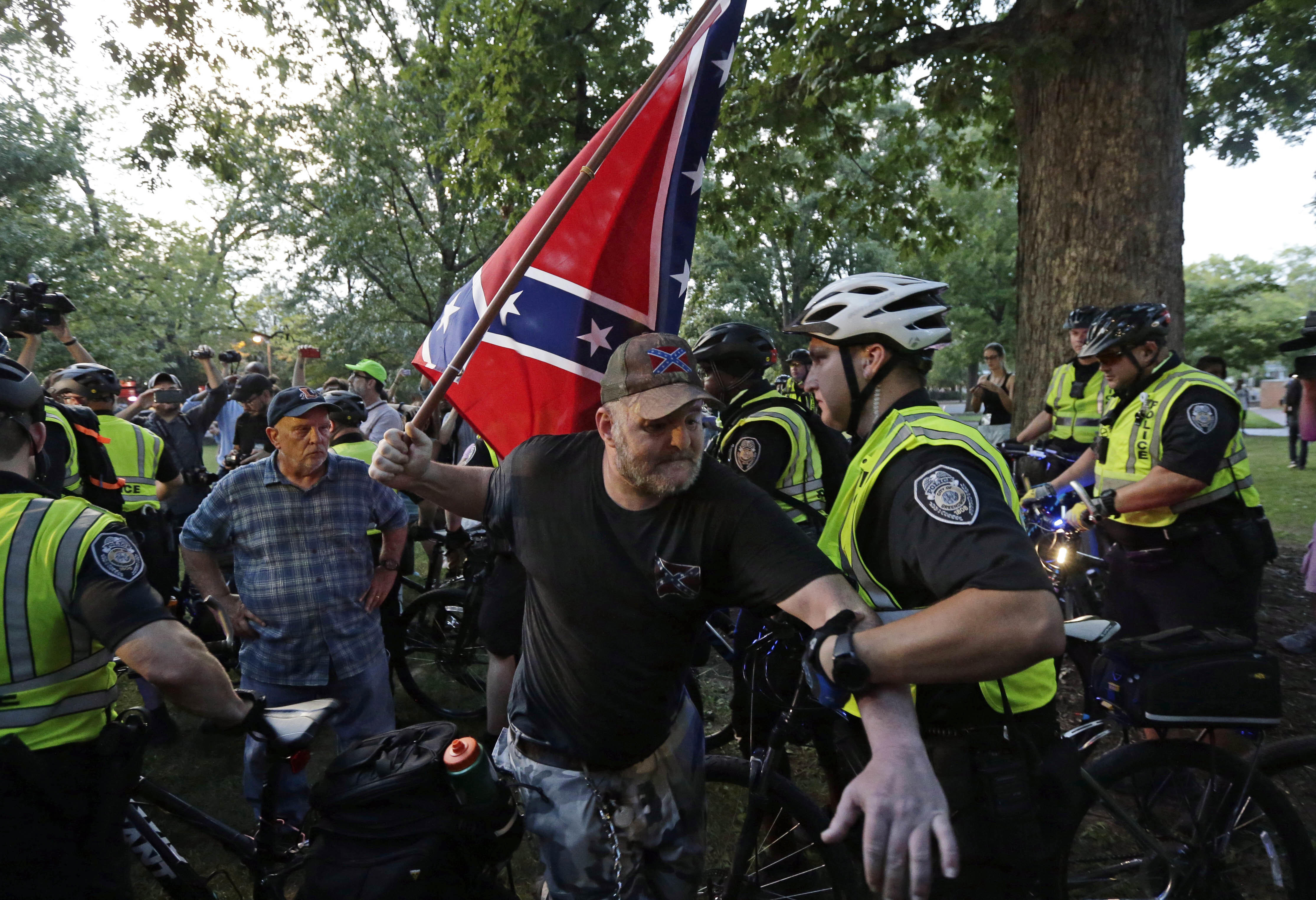 Police arrested three people at dueling protests at protests both for and against a Confederate monument called "Silent Sam" at the University of North Carolina, CBS Raleigh affiliate WNCN reports. Protesters toppled the century-old statue on Aug. 20.

Supporters of restoring "Silent Sam" to its original spot were separated by barricades from the protesters, who held a dance party on McCorkle Place as a way to divert attention from their opposition, WNCN reports.

"It's really close to campus, so it's going to affect our daily life. I think its really important to know what's going on in your community," UNC freshman Elise Mahon told WNCN. "This is such an emotionally charged event for a lot of people, so it means a lot to a lot of people I go to school with."

Those protesting "Silent Sam" chanted "cops and Klan go hand in hand," "Go home Nazis," and more, according to WNCN. Those in favor of returning "Silent Sam" to campus remained relatively quiet.

UNC said in a news release that law enforcement used a "pepper fogger" on protesters to maintain order.

University spokeswoman Carly Miller said two people were arrested for affray, while a third was arrested for resisting an officer. Officials did not release their names or say if they were protesting for or against the statue. There were no injuries reported.

Four people have been charged in connection with toppling the statue on Aug. 20.

Raul Jimenez, who was previously acquitted of helping topple another Confederate statue in nearby Durham, briefly appeared in court on misdemeanor charges of rioting and defacing a public monument. Three others have later court dates on the same charges of helping to tear down "Silent Sam" at the University of North Carolina in Chapel Hill on Aug. 20.

University and legislative leaders have demanded a hard look at how a "highly organized" group of protesters used banners to conceal their preparations to bring down the statue with a rope - and why police were non-confrontational. Thursday's hearing came a day after public records revealed that a town police chief assisting the campus force with crowd control told his officers to stay back not long before the statue fell.

Asked outside court if he knew about advance plans to topple "Silent Sam," Jimenez said: "I think what happened is the community came together and made a decision, whether it was that night ... whenever it was; that decision was to take down the statue."

UNC Chancellor Carol Folt "has been asked by students and faculty to take this statue down, trying to go through legal channels ... but she has refused and so the community took action," he said in an interview.

Jimenez, 27, declined to say whether he's guilty of helping topple the monument that protesters called a racist symbol. But he said he will fight the charges, calling the takedown "a righteous show of people power."

Several-dozen supporters packed the courtroom, some wearing buttons with the slogan "Do It Like Durham & Chapel Hill."

Nine others were arrested during follow-up demonstrations near the statue's empty pedestal on Saturday.