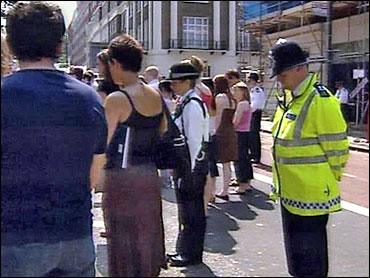 a silent tribute (video)
to the victims, as police confirmed the attacks were the work of suicide bombers.

Police raised the official death count in the bombings from 52 to 53.

Queen Elizabeth II stood motionless outside Buckingham Palace, and a crowd of thousands filled Trafalgar Square, where many could be seen wiping away tears and hanging their heads in prayer during the two-minute tribute that began at noon.

The silence was broken only by the tolling of Big Ben.

The London mayor's office organized this event to remember the victims of the attacks, to thank the emergency workers who saved lives and to show that this is a city united, reports CBS News Correspondent Bianca Solorzano.

Outside King's Cross station, a focus for the city's grief in the week following the bombings, trucks, cars and mounted police officers paused on busy Euston Road to join the tribute.

London police earlier handed out leaflets asking for help in tracking down the bombers, and authorities in the northern city of Leeds — where investigators believe the suspects had lived — searched another address in their hunt for evidence from the attacks that killed 52 people and injured 700.

BBC television and Sky News reported that one of the bombers was a Jamaican-born Briton they identified as Lindsey Germaine. Authorities believe the other three attackers were Britons of Pakistani descent.

"We know who the four people carrying the bombs were ... and we believe they are all dead," Metropolitan Police Commissioner Ian Blair said. It was the first time police said publicly that the attackers were suicide bombers.

CBS News Correspondent Charlie D'Agata reports investigators continue to search for the mastermind behind the attacks, a suspect thought to have ties to al Qaeda followers in the United States.

Detectives think the suspect, a Pakistani Briton in his 30s, arrived in Britain last month and left the day before the bombings, according to Britain's Press Association and The Times newspaper.

Across Europe, people also paused to honor the dead.

In Madrid, Spain, which was hit by al Qaeda-linked train bombings that killed 191 people last year, Mayor Alberto Ruiz Gallardon and other officials observed the silence in a plaza outside town hall.

Pope Benedict XVI prayed for the victims at his holiday retreat in the Italian Alps, the Vatican said.

British television interrupted broadcasting to show photos of the aftermath of the July 7 attacks: soot-faced commuters fleeing in fear and paramedics tending to the injured.

At the British Open in St. Andrews, Scotland, an airhorn signaled suspension of play and Tiger Woods took off his hat, closed his eyes and bowed his head at the 14th hole.

In Leeds, hundreds gathered in the neighborhood where one of the suspects reportedly had counseled disabled youth. With heads bowed, they marked the moment.

"We condemn these terrorists and what they have done," said Munir Shah, imam of the Stratford Street mosque near the Leeds neighborhood that police were searching. "We refuse to call them Muslims. They are not. Islam does not agree or teach about the killing of innocent people."

A military bomb squad on Thursday cordoned off half a block of the Beeston area of Leeds, which has an Islamic youth center, as unit members in camouflage fatigues expanded their systematic investigation of the neighborhood.

Prime Minister Tony Blair marked the two-minute silence in the garden of his 10 Downing St. office, where he was holding a reception for police officers receiving bravery awards not related to the bombings. In the House of Commons and the House of Lords, lawmakers broke off debates to join in the silence.

"As we stand together in silence, let us send a message to the terrorists — you will not defeat us and you will not break us," said George Psaradakis, who was driving the double-decker bus blown apart by a bomb that killed 13 of his passengers.

Surveillance cameras captured images of the four suspected bombers as they arrived in the capital 20 minutes before the rush-hour explosions began.

The Times newspaper, quoting unidentified police sources, said detectives were interested in finding Magdy el-Nashar, 33, an Egyptian-born academic who recently taught chemistry at Leeds University. The Times said he was thought to have rented one of the homes being searched in Leeds.

In a statement Thursday, the university said el-Nashar came to Leeds in October 2000 to do biochemical research, sponsored by the National Research Center in Cairo, Egypt. It said he earned a doctorate on May 6.

"We understand he was seeking a postdoctorate position in the U.K.," the university said. "His visa was updated by the Home Office earlier this year. He has not been seen on the campus since the beginning of July."

Neighbors said el-Nashar had recently left Britain, saying he had a visa problem, The Times reported.

Late Wednesday, Scotland Yard said anti-terror police raided a residence northwest of London. Officers carried out a forensic examination, but police would not say why the house in a quiet residential street in Aylesbury, about 40 miles from London and 20 miles from Luton, was targeted. No arrests were reported.

A British security official told AP on Thursday that Britain's intelligence and security services were cooperating closely with their Pakistani counterparts because of the suspects' links with the country.

A U.S. government official confirmed Shahzad Tanweer, Hasib Hussain and Mohammed Sidique Khan are thought to have been three of the bombers. The official spoke on condition of anonymity because British investigators have not publicly released the identities of the suspected attackers.

British media said Tanweer was a 22-year-old cricket-loving sports-science graduate; Hussain, a 19-year-old; and Khan, the 30-year-old father of an 8-month-old baby.

Authorities suspect the attackers did not work alone, and that their collaborators or leader are likely still at large. Home Secretary Charles Clarke said authorities were looking closely "at the relationship between the people who may have committed the offenses and the wider network around them."