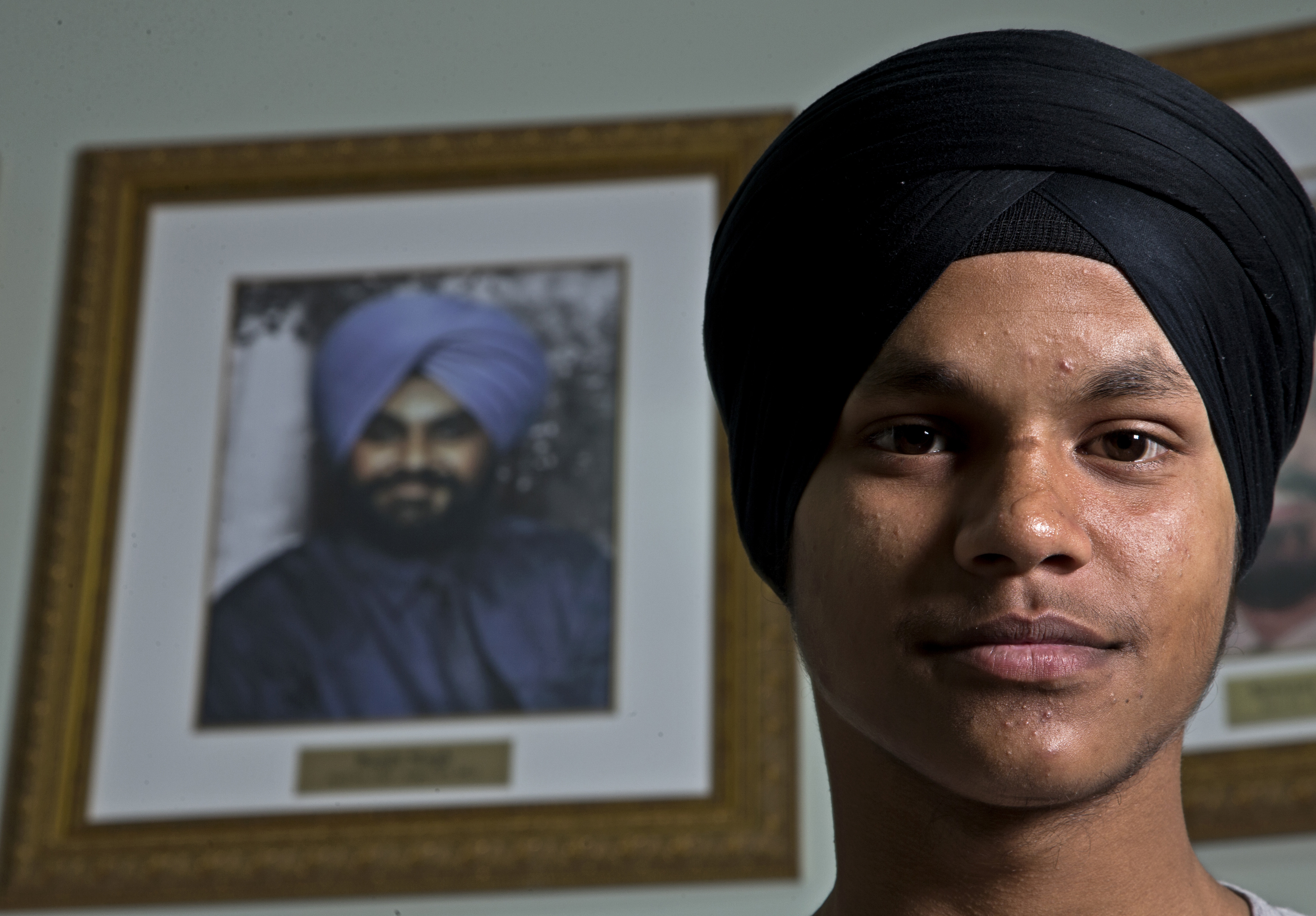 OAK CREEK, Wis. Gurvinder Singh approached his father's open coffin with one thought: "Please, god, it's not my dad."

As he stepped closer, he realized the man was indeed the father he knew only from photographs. The 14-year-old stood numbly, not crying until officials wheeled the coffin toward a hearse. Then Gurvinder collapsed in tears, inconsolable, telling his mother he wanted to die in the same flames that would cremate his father.

Ranjit Singh left his family behind in India in 1997, to work as a priest at the Sikh Temple of Wisconsin. He always planned to visit Gurvinder, his only son, whom he last saw as a 7-month-old. But last August, two months before the father was to go home for the first time in nearly 14 years, Singh and five others were fatally shot by a white supremacist at the temple. The gunman's motive still eludes police.

With the anniversary of that day approaching, Gurvinder recently sat in the same temple, down the hallway from where his father was killed, and recounted the few memories he has of the man he knew only from daily but brief phone calls.

"I've never seen my dad. I just saw him dead," Gurvinder said softly, shaking his head. "Whenever I look at someone's dad holding him I can't see that. It's hard to see."

Gurvinder, now 15, is quiet and soft-spoken. But he's quick to smile at people he's meeting for the first time. He's also eager to help out at the Oak Creek temple, carrying in boxes of groceries and keeping common areas clean.

He spends nearly every day at the temple. Wherever he goes he's reminded of the father he never met, from memorial portraits of all six victims that now adorn the lobby, to the bedroom his father called home. He also has a tattoo on the back of his left hand — the same tattoo his father had — of Punjabi characters that say, "One god."

But he pauses daily at one place: a single bullet hole, about the size of a dime, in the door jamb leading to the main temple. Temple officials left the hole unrepaired as an eternal reminder, affixing a tiny plaque below it with the date of the shooting and the words, "We Are One."

Gurvinder said it's not difficult to spend so much time around where his father died. He said death can come at any time to any person, and he leaves it to God to take him or anyone else whenever it's time.

Still there's angst — especially about the shooter who eventually killed himself after he was wounded by a police sniper the morning of Aug. 5, 2012. Gurvinder understands that as a Sikh, his religion teaches forgiveness and peace.

But if the gunman were alive, "I would kill him. I don't speak anything to him — I just shoot him," Gurvinder said. He added that a therapist he's been seeing for a year has helped him deal with his anger.

Gurvinder was sitting at home in New Delhi last year when a cousin told him there had been a shooting at the Wisconsin temple where his father worked. Even as he phoned his mother and two sisters, Gurvinder refused to believe his father was hurt.

Then the victims' identities were confirmed. With the FBI easing the visa process, Gurvinder and his family rushed to the U.S. to attend the funeral. When they arrived one of the first things Gurvinder saw was the pair of black shoes he had asked his father to send him in India.

A few days later he saw his father lying in the coffin. Ranjit Singh appeared to be sleeping, and he looked exactly as he did in the photographs he frequently sent back home. Gurvinder gazed at his father in silence for 10 to 15 minutes before he felt his legs give way.

He and his family had packed for a two-month trip to America, but once they arrived, Sikh friends advised them to stay. The U.S. Department of Justice has helped extend their visas, and Gurvinder has been attending public school. He just finished ninth grade.

He hopes to stay in the U.S. permanently, going to college and eventually opening up his own business.

"Mom keeps saying I should be a doctor," he said. "But I don't really have interest. I don't like seeing death."

Gurvinder and his father spoke by phone daily for about five minutes. They would talk about their lives, and occasionally Ranjit Singh would ask what his son wanted from the U.S. Gurvinder would reply that all he wanted was for his father to come home.

Singh would apologize and make vague promises about coming home. But last year he promised to return in October for Diwali, the Indian festival of lights. Gurvinder had just one goal: to take his father to a secluded place and ask why he left. But it never happened.

Despite the pain the memory of his father inspires him. He says he wants to grow up to be such a good person that people say, "Yes, that's Ranjit Singh's son."

He also said he plans to remember his father by designing a tattoo in his father's honor for his right shoulder. His mother overheard his comment and shook her head disapprovingly, but he patted his shoulder firmly.