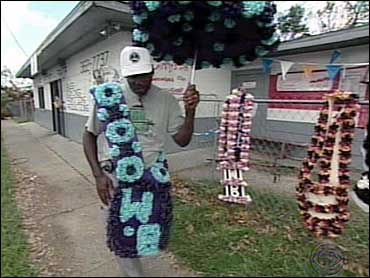 A woman waters her mint plants outside her house. A man rides his bicycle on a levee. A newspaper truck lumbers down the road, the passenger handing out papers.

In this battered, flooded city, a few signs of normalcy have flickered defiantly in recent days. While the bodies of their fellow citizens are being removed and counted, while the monumental task of draining, cleaning and rebuilding looms, some residents are starting to reclaim a sliver of their pre-hurricane lives.

CBS News Correspondent Randall Pinkston reports that, despite the massive cleanup and rebuilding that lie ahead, some in New Orleans are even looking forward to Mardi Gras.

"If there was only two people left in new Orleans, one of them would give the parade and the other one would stand watch," said Lynne Bowen.

Pinkston reports that the famous Kern's Mardi Gras World warehouse is a relief center for hurricane victims, but they're already planning for next year.

"Well, it's going to pick up the spirit around here. It'll pick us up, bring us back and we'll get back to a regular city again," said Lynn Petrie.

Their homes may be damaged, but they're dry — spared by quirks of geography from the flooding that devastated huge chunks of the city. So, as soldiers and police have tried to convince people living on flooded streets to comply with an evacuation order, the luckier residents have quietly been allowed to go about their lives.

"I think you have to do the things that give you strength to get through this," said Frank Rosinia, an anesthesiologist perspiring as he rode a racing bicycle. He's been working at a hospital since Hurricane Katrina hit.

What was important to those who remained in their homes or ventured out was routine, the kind they followed before the hurricane, the kind many didn't pay much attention to until it was threatened.

"We are basically doing all our routine chores with the exception of maintaining our yards," said Johnie Bradley, 62, as he sat in front of his house with a boom box perched on his knees. His home is in the Algiers district, across the Mississippi River from the French Quarter; neither area was flooded.

"Our main focus is to try to get some normalcy back into our lives," said Bradley, who is retired from the Air Force.

For Roberta Taylor, 42, getting back to normal started with not taking a hammer to bed — a signal she was finally feeling comfortable enough that her Algiers Point home wouldn't fall prey to looters. It also meant focusing on something other than her own life, something important to her family. So the task of watering mint plants, which her family has grown for sweet iced tea since she was a child, was far from mundane.

"I grew up with this mint," she said. "Let me tell you, this mint is never going to die."

Authorities estimate there are thousands who have stayed in their homes, particularly in areas that weren't flooded when the levees breached and sent water cascading into most of the bowl-shaped city.

But for some of the remaining residents, life has become a desperate act of holding onto what little they have, inside homes that are flooded or surrounded by water. Their struggle is not about routine, but about hanging on and fighting off mosquitoes, hunger and thirst in hopes they can hold out until the water recedes and services such as electricity and running water return.

Except for military and emergency vehicles, and trucks carrying work crews, the streets are empty of traffic and nearly empty of pedestrians. Blocks of restaurants, stores and other businesses remain dark.

That left people to casual pursuits: reading a book or chatting with neighbors who also stuck it out.

At night, most of those who have stayed hunker down indoors. A few have clung to another routine, hanging out at a neighborhood bar that now serves its beer warm. On one recent night, a dozen or so in the French Quarter gathered at a darkened bar, lit only by tall prayer candles, a radio blaring out some scratchy tunes.

The bar's telephone actually worked. Callers wanted to know if Johnny was there, or Sam, or what happened to Martha. Patrons warned each other to stay inside, not to wander out on the sidewalk with an open bottle; police, they said, would haul you in for violating curfew.

In the daylight, about a dozen men were hired to clean sidewalks in the French Quarter under a blaring sun. The sprucing up had begun, with the floodwater stench wafting through the narrow streets a reminder of the disaster.

"I just went over to where all those trucks were parked to see if they were hiring, and they were," said Robert Rogers, 58. "They said I'd have a job for at least three or four months. And it pays a lot better than what I was making. Most I made before the storm was $30 a day. These people are paying $125 a day.

"We're going to get all these sidewalks cleaned up so people can walk down them, because they're going to be coming back," Rogers said.

Carnell Allen and his brother, Cuttie Allen, weren't flooded out of their houses, which are next door to each other in Jefferson Parish. But the life preserver draped over an ironing board in Carnell's home is evidence it almost happened. And when the hurricane blew through, it swept away big chunks of their ceilings, walls and even flooring. For the two brothers, the job is to keep busy.

"It helps your nerves settle to keep on," said Cuttie Allen, pointing to the sheetrock, insulation and other debris that he and his brother took from their homes and piled on the sidewalk out front. It also helps, he said, that the steady stream of military vehicles that pass up and down the street sometimes stop to give them water.

So does eating the way they did before their homes were devastated. They may not be able to use their kitchens, but they can still eat pork chops they grill on the barbecue on their front lawn.

For Ray Menard, the evacuation offered a chance for one of his favorite activities: reading in peace.

"You don't have to put up with the screaming masses," said Menard, 77, as he sat outside his apartment near Lee Circle. He alternated between reading the paper and a favorite book, "The Art of Doing Nothing."

"It's a delightful book," he said.