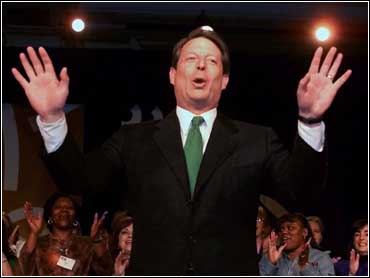 Vice President Al Gore collected the backing of a key environmental group in his presidential bid Monday while casting himself as the last defense against moneyed special interests.

"I know the special-interest attacks are going to continue," Gore said in accepting the endorsement of the Sierra Club, a 600,000-member environmental advocacy group. "So let me be perfectly clear: I wear those attacks as a badge of honor."

Gore went to a photo-friendly riverfront park to claim the endorsement, in an important battleground state. He joked about the furor surrounding Republican rival George W. Bush's selection of a running mate.

"Right now, I want to say how proud I am to be running with the Sierra Club," said Gore.

"I'm proud that from my earliest days in Congress, I took on the big polluters to protect the environment," he said. "I'm proud that we now have the cleanest air and water in a generation."

"The Sierra Club endorses Al Gore because he is committed to cutting air and water pollution and protecting our nation's treasured forests and wildlands," group president Robert Cox.

Introducing Gore, Cox said he would be "the most pro-environment president in our history."

The issue could play an important role in the election, and Gore was working overtime to draw attention to the endorsement, making the case that one of the nation's oldest and most influential environmental groups has examined his record and found it acceptable.

"It is an honor that I will seek to live up to every day," Gore said.

Some surveys have shown that Green Party nominee Ralph Nader draws support from Gore by attracting, in part, environmental activists who aren't convinced that the Democrat remains committed to the issue.

That trend is most pronounced in some key battleground states such as Michigan and California, where Gore must do well.

Seeking to counter the perception that he isn't committed to environmental issues, Gore pointed to the Sierra Club endorsement, and leaders of the group said they carefully surveyed members before acting.

Officials said the group launched a six-month review process consulting with members and chapters across the nation. Thirty-nine chapters representing 400,000 members favored the endorsement, they said.

After making his environmental pitch in Michigan, Gore was headed for Ohio, yet another big Midwestern industrial state that holds the key to the race.

"I've clled for a bold new commitment to environmental protection and long-term energy independence that is without precedent in our history," Gore said in his remarks.

His book Earth in the Balance is often cited as outlining his commitment to the environment, though some critics wonder if he has retained that fervor. In accepting the Sierra Club endorsement, he sought to turn that question on its ear.

"I'm told that in these days leading up to the Republican National Convention, copies of Earth in the Balance are selling quite well in Philadelphia," he said.

Gore kept a relatively low profile Sunday, raising $150,000 at a Democratic National Committee event in New Jersey and pulling in $500,000 in a similar gathering in New York.

After leaving Michigan on Monday, he was meeting with union leaders in Ohio and being briefed on job training programs in that state. Later in the week he heads back to Washington, where he plans events to tout his backing for programs for the disabled.

Gore also plans a family vacation that will take him out of the limelight during the Republican convention beginning July 31.