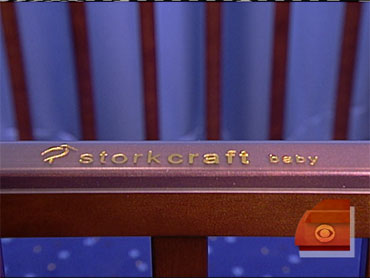 The largest crib recall in United States history is under way.

The cribs -- more than 2.1 million of them -- are made by Stork Craft Manufacturing, which is based in British Columbia, Canada.

All have dropdown sides that can malfunction.

And, reports "Early Show" Consumer Correspondent Susan Koeppen, they were sold at some of the most popular stores in America.

At Sugar n' Spice Daycare in Lafayette, La., they're scrambling to figure out what to do with dozens of cribs -- all part of the recall.

"It really is disturbing," Sugar 'n Spice's president, Jonathan Pearce, told Koeppen. "We need to take care of it while we can. We need to make sure that nobody else is hurt or injured."

The cribs have been linked to more than 100 incidents of the side rail detaching -- in some cases, falling off completely, Koeppen points out, adding that numerous children have been injured. And four have died: two in New York, one in West Virginia and one in Louisiana.

CPSC: Information on Models, Where Sold And When

The problem involves plastic hardware that can break, causing the side rail to detach from the crib, Koeppen explains. That creates a space big enough for an infant to become trapped and suffocate.

The chairperson of the Consumer Product Safety Commission, Inez Tenenbaum, says manufacturers "are putting hardware to make those sides drop down, and the hardware is not substantial."

The recalled cribs were made between January 1993 and October 2009. Approximately 147,000 carry the Fisher-Price logo.

The CPSC says parents should stop using the cribs immediately -- and go to the Stok Craft Web site for a free repair kit, which immobilizes the side rail, so it doesn't go up or down at all.

But Koeppen says, "I've heard it's been very difficult to get on the Web site" to get in touch with anyone at the company," but, "the repair kits are out there."

And, she says, despite numerous calls, CBS News has been unable to reach anyone at Stork Craft for comment on the recall.

On "The Early Show" Tuesday, Tenenbaum was asked what took so long for the recall to be instittued since, as co-anchor Maggie Rodriguez noted, the crbis have been in use 16 years.

"Well, in some cases, the crib was assembled in the wrong way by the purchaser," Tenenbaum replied. "In other ways, we have just not been acting as quickly as we should have at the Consumer Product Safety Commission on these type of instances. I have just been appointed a few months ago to chair the Consumer Products Safety Commission, and this case came in front of me just a few weeks ago. The next day after hearing about it, I had the top staff come to my office and we worked through a plan to recall this crib."

"Would the CBPS like to see all drop-side cribs banned altogether?"

"We are certainly going in that direction," Tenenbaum responded. "The industry has said, just yesterday (Monday), that they will no longer recommend drop-side cribs. And in the case of Stork Craft, we don't want consumers to use these drop-side cribs until they get the kit that makes the drop-side immovable. That is the danger, the side goes up and down multiple times during the day and, over the course of time, the hardware becomes detached, creating this wedge where the child falls into it and suffocates."