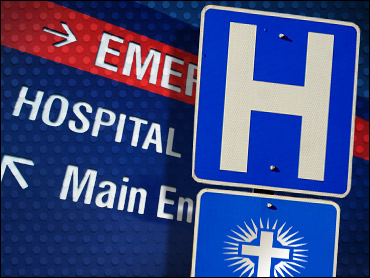 What should you do if you get sick on Christmas Eve? Should you go to the emergency room?

Ashton said you shouldn't go the emergency room unless it is actually an emergency.

"You don't want to use the emergency room in place of a doctor's office, especially if it's a holiday like Christmas Eve or Christmas," she said.

She added an emergency means chest pain or shortness of breath, an injury like a fracture or bad laceration.

"The thing people need to understand is that an emergency room is just that: It's for emergencies," she said. "Therefore, it works by a triage system where the most severely ill get cared for first. Even though you might have been there first, someone having a heart attack is going to get taken care of first versus someone who comes in with the flu."

The average emergency department patient spent more than four hours there last year, according to a nationwide survey. Although that was an improvement of two minutes from 2007, time spent in the ER -- including waiting and treatment -- is still about half an hour more than it was in 2002, according to the 2009 Emergency Department Pulse Report by Press Ganey, a hospital consulting firm.

Is there an alternate place you can go to if you need care?

Ashton said if it's a real emergency the most important thing to do is go to the ER. However, if you have a sore throat or fever, and you can't reach your doctor then there are lots of places you can consider, such as walk-in clinics that have urgent care. They're usually open 24 hours and day, seven days a week, and on holidays.

If you don't have a fever or any other medical problems, Ashton said you can let the food poisoning run its course, from 12 to 48 hours. However, if you're at high-risk, meaning you are elderly, pregnant or very young, Ashton recommended seeking emergency help if its lasts 12 or more hours.

"If you go through a period of 12 hours where you can't drink or eat, then your chance of getting really sick is high," she said. "If you fall into one of these high risk groups call your doctor, if you're doctor isn't available, then this is a case where you should go to the ER even if it is a holiday."

To avoid the flu this holiday season, Ashton shared her three top tips:

Get Enough Sleep: During the holiday season people are extremely busy so they're getting less sleep. Good thing to keep in mind here is people get rundown and that can have an effect on your immune system. Try to make yourself get a decent amount of sleep. An adult needs sevent to eight hours a night. It's important to understand that you really can't catch up on good sleep. You cannot store it up. You can't sleep four hours one night then sleep 20 hours over the weekend and average those hours out. It doesn't work that way. When you mix in lack of sleep with inevitably hugging and kissing people at holiday parties, all of these factors can wear down the immune system and as a result people become more susceptible to becoming ill.

Load Up on Vitamin D-Rich Foods: Vitamin D can help boost the immune system. The primary source of vitamin D is sunlight but in the winter we don't get as much sun therefore not getting enough Vitamin D. What you should do is load up on D-rich foods such as tuna and salmon and vitamin D-fortified products like cheese and milk.

Wash Your hands Properly: It's important to wash your hands frequently and to carry around hand sanitizer with you. According to the journal Tropical Medicine and International Health, regular hand washing can cut your risk of a respiratory illness by 24 percent. Rub your hands together with soap for 20 to 30 seconds and dry your hands with a paper towel instead of a blower. The friction may help banish more bacteria.

"Even if you take these measures, the bottom line is if you are exposed to the flu you can still get sick, but it's a start," Ashton said

If you're feeling sick, should you stay home from a holiday party?

"You absolutely should not go," Ashton said. "When you're feeling sick, you can be more contagious and you're not doing anyone a favor by going. In fact you'd be giving them the worst gift."

If you do end up going, Ashton said you should definitely not hug, kiss, or shake hands with anyone, and explain that you're sick, and keep your distance.