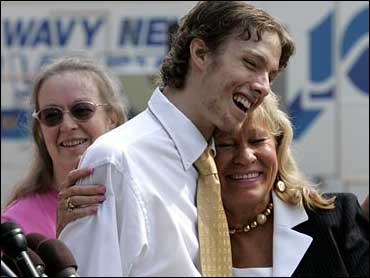 A 16-year-old cancer patient's legal fight ended in victory Wednesday when his family's attorneys and social services officials reached an agreement that would allow him to forgo chemotherapy.

At the start of what was scheduled to be a two-day hearing, Accomack County Circuit Judge Glen A. Tyler announced that both sides had reached a consent decree, which Tyler approved.

Under the decree, Starchild Abraham Cherrix, who is battling Hodgkin's disease, will be treated by an oncologist of his choice who is board-certified in radiation therapy and interested in alternative treatments. The family must provide the court with updates on Abraham's treatment and condition every three months until he's cured or turns 18.

"It's all over. It's everything we fought for, everything we wanted to ever have, we've won. We got our freedom back," Abraham said outside the courthouse after the hearing.

Tyler emphasized that the decree states that the parents weren't medically neglectful.

Abraham said that he saw the doctor last week, and the doctor assured him that his cancer is curable. The teen said he'll continue following an alternative herbal treatment called the Hoxsey method as well as his doctor's treatment plan. The regimen won't include chemotherapy, but radiation is a possibility, he said.

After the short hearing, the judge looked at Abraham and said, "God bless you, Mr. Cherrix."

Last summer, the teen was diagnosed with Hodgkin's disease, a cancer of the lymphatic system considered very treatable in its early stages. He was so debilitated by three months of chemotherapy that he declined a second, more intensive round that doctors recommended early this year.

He since has been using the Hoxsey method, the sale of which was banned in the United States in 1960.

After Abraham chose to go on the sugar-free organic diet and take liquid herbal supplements under the supervision of a Mexican clinic, a social worker asked a juvenile court judge to intervene to protect the teen's health. Last month, the judge found Abraham's parents neglectful and ordered Abraham to report to a hospital for treatment as doctors deem necessary.

Lawyers for the family appealed, and an Accomack County Circuit Court judge suspended that order and scheduled a new trial to settle the dispute. The judge scheduled the trial for two days but had indicated he would like to finish in one, said John Stepanovich, a lawyer for the parents.

Abraham is still on the Hoxsey method, but Stepanovich stressed that the family hasn't ruled out other possible treatments, such as immunotherapy or radiation treatment in small doses.

According to the American Cancer Society, there is no scientific evidence that Hoxsey is effective in treating cancer in people. The herbal treatment is illegal in the United States but can be obtained through clinics in Mexico, and some U.S. naturopathic practitioners use adapted versions of the formula.