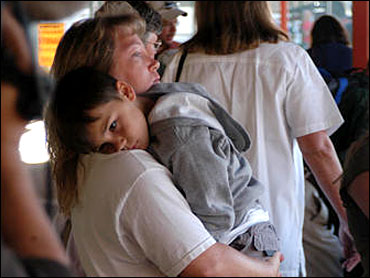 Passengers began showing up in the cruise ship Holiday's infirmary two days into a five-day cruise to Playa Del Carmen and Cozumel, with symptoms of vomiting and diarrhea. By Wednesday, 79 of 1,670 passengers and 41 of 660 crew members had become ill, said cruise line spokeswoman Jennifer de la Cruz.

"Everyone we talked to had at least one family member or knew someone who was sick," said passenger Ginger Sharp of Guntersville, Ala. Her husband, John, was ill for about 24 hours.

Ships must report to the CDC if 2 percent of passengers or crew exhibit gastrointestinal symptoms; 3 percent is the statistical definition of an outbreak, Forney said.

Forney, speaking at a seminar in New York sponsored by the cruise industry, said noroviruses — a common and contagious family of viruses that cause sudden nausea, vomiting and diarrhea — cause an estimated 23 million illnesses a year, lasting up to 48 hours.

There have been 23 outbreaks of gastrointestinal illness aboard 19 ships so far this year, Forney said. Eleven were confirmed norovirus.

Samples from aboard the Holiday will be sent to the CDC for testing, de la Cruz said. "It typically takes a while for the results to come in," she said.

The Holiday was set to leave Thursday afternoon on a four-day trip to Mexico. About 1,500 people were booked on that trip, de la Cruz said.

"We have well-established rigorous cleaning and sanitizing protocols for a turnaround day, for that period between when one cruise ends and another one starts," she said.