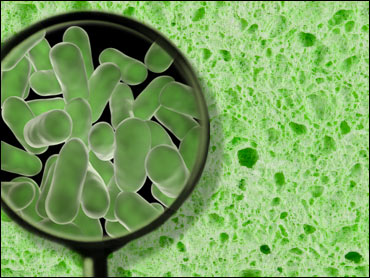 Someone in your house have the sniffles? Watch out for the refrigerator door handle. The TV remote, too. A new study finds that cold sufferers often leave their germs there, where they can live for two days or longer.

Scientists at the University of Virginia, long known for its virology research, tested surfaces in the homes of people with colds and reported the results Tuesday at the nation's premier conference on infectious diseases.

Two years ago, she and other doctors showed that germs survived in hotel rooms a day after guests left, waiting to be picked up by the next person checking in.

For the new study, researchers started with 30 adults showing early symptoms of colds. Sixteen tested positive for rhinovirus, which causes about half of all colds. They were asked to name 10 places in their homes they had touched in the preceding 18 hours, and researchers used DNA tests to hunt for rhinovirus.

"We found that commonly touched areas like refrigerator doors and handles were positive about 40 percent of the time" for cold germs, Winther said.

All three of the salt and pepper shakers they tested were contaminated. Other spots found to harbor the germ: 6 out of 18 doorknobs; 8 of 14 refrigerator handles; 3 of 13 light switches; 6 of 10 remote controls; 8 of 10 bathroom faucets; 4 of 7 phones, and 3 of 4 dishwasher handles.

Next, the researchers deliberately contaminated surfaces with participants' mucus and then tested to see whether rhinovirus stuck to their fingers when they turned on lights, answered the phone or did other common tasks. More than half of the participants got the virus on their fingertips 48 hours after the mucus was smeared.

The study was sponsored by Reckitt-Benckiser Inc., makers of Lysol, but no products were tested in the research. The study, designed by doctors with no ties to the company, was an effort to lay the groundwork for future research on germs and ways to get rid of them.

In a separate study, the university's Drs. Diane Pappas and Owen Hendley went germ-hunting on toys in the offices of five pediatricians in Fairfax, Va., three times during last year's cold and flu season.

"Mamas know this," Hendley said. "They say, `We go to a doctor for a well-child checkup, the kids play with the toys and two days later they have a cold."'

There is no proof that the remnants themselves can infect, but their presence suggests a risk, said Dr. Paul Auwaerter, an infectious-diseases specialist at Johns Hopkins University. He was familiar with the study but had no role in it.

Researchers note that the study was not "blinded" - everyone knew who was doing what, and mask wearers may have been less likely to report cold symptoms later because they believed they were taking steps to reduce that possibility.

The federal Centers for Disease Control and Prevention paid for the study.

The conference was a joint meeting of the American Society for Microbiology and the Infectious Diseases Society of America.