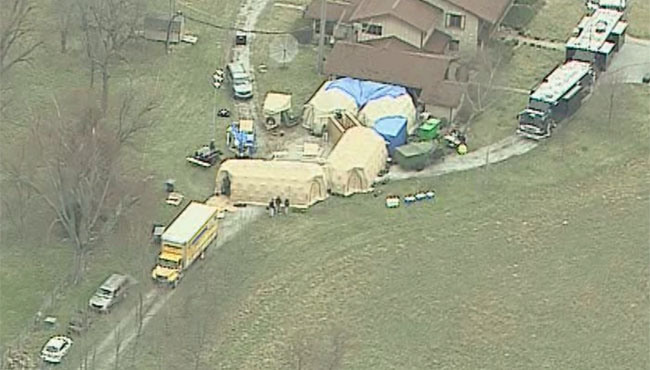 INDIANAPOLIS - FBI agents on Thursday were still removing thousands of artifacts ranging from arrowheads to shrunken heads and Ming Dynasty jade from a house in rural Indiana.

A 91-year-old man amassed the vast collection over several decades, perhaps since he began digging up arrowheads as a child.

People who had toured Donald Miller's home years before the FBI's arrival Wednesday described it as a homemade museum containing diverse items including fossils, Civil War memorabilia and what the owner claimed to be a chunk of concrete from the bunker in which Adolf Hitler committed suicide toward the end of World War II.

"It was just like a big chunk of cement from when they demolished it or whatever," said Joe Runnebohm, whose plumbing business did work in one of Miller's houses several years ago.

Agents of the FBI's art crime team began loading trucks with artifacts that Donald Miller acquired over the decades from sites as varied as China, Russia and Papua New Guinea. However, the FBI was careful not to say whether they believed Miller had knowingly broken any laws. The FBI's aim is to catalog the artifacts and return them to their countries of origin.

The laws regarding the removal or collection of cultural artifacts are extremely complex. State, federal and international laws are involved, Patty Gerstenblith, a professor of law at DePaul University in Chicago. Much depends on whether objects are considered stolen or were imported with a license, and international treaties dating back as far as 1987 come into play. The United States has various agreements with 15 countries that prohibit importation of items that were illegally acquired, she said, and some nations such as Egypt forbid the export of any cultural objects that were dug from the ground.

It wasn't immediately clear how Miller acquired some of the items, but those who know him said he had been collecting since childhood.

"He's been digging, I'm sure, since he was old enough to dig," said Andi Essex, whose business repaired water damage in Miller's basement a few years ago. None of the artifacts was damaged, she said.

Miller made no secret of his collection, those who know him said. He took schoolchildren on tours of his amateur museum, which even contained human remains, they said. A 150-foot underground tunnel linking two homes on Miller's property in a rural Indiana area whose largest city has a population of about 6,000 people, was adorned with a 60-foot, 4-foot-wide anaconda snakeskin, Runnebohm said. Carefully labeled glass showcases boasted hundreds of Native American arrowheads, along with human skulls - including one with an arrowhead stuck in it. Upstairs was a pipe organ that Miller played for visitors.

"He never tried to hide anything," Runnebohm said. "Everything he had he was real proud of, and he knew what everything was."