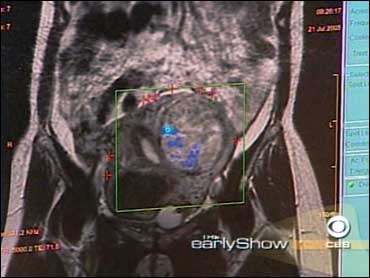 Doctors are using ultrasound instead of surgery to treat uterine fibroids, non-cancerous tumors that can develop in a woman's uterus and cause pain, discomfort and bleeding if they grow too large.

Senay spoke with Olivia Or Strygler, who was having a procedure to remove a fibroid that developed in the ten years since she had an operation to remove other fibroids.

"When they get to be (as large as this new one), they are very uncomfortable," Or Strygler says.

But this time, Senay observes, Or Strygler doesn't have to go under the knife. Instead, Dr. Robert Min and his team of radiologists at NewYork Presbyterian-Weill Cornell Medical Center use the latest non-invasive technology to tackle the problem.

First, her tumor is mapped out with the help of magnetic resonance imaging, or MRI.

Min shows Senay the fibroid found by the MRI.

Next, cutting edge ultrasound technology is used to focus a beam of high-intensity sound waves through the body to target many different parts of the tumor. The energy created by the focused ultrasound heats and destroys the fibroid tissue.

"What we hope," Min says, "is that over time, these tumors then shrink. …One of the advantages of MR-guided, focused ultrasound is the fact that it is minimally to non-invasive, which means there is no surgery."

Or Strygler is conscious throughout the painstaking procedure, which can take up to four hours, as the tumor is gradually destroyed.

"Some of these patients require a minimal amount of medication, just to relax them," Min notes. "They're wide awake. And that's important. 'Cause they give us feedback while we're doing it. But they are wide-awake."

"It's a little bit uncomfortable because you do have to lie still," Or Strygler says. "It's really a small price to pay, the discomfort, which is so minor compared to a big incision in your stomach."

It will take months for the remaining tumor tissue to be reabsorbed by her body, Senay says.

But she's back at home within a few hours.

"I'm up immediately, walk around. I smile. I talk," Or Strygler chuckled. "There was no pain. It's amazing what technology can do."

She went in for a second ultrasound procedure to finish the job, and says she can already tell the difference in her symptoms.

Final FDA approval of the new treatment method could come by the end of the year, Senay adds.

And the ultrasound technique is being tried for cancerous tissue, as well. Trials are getting under way to see whether it's useful in fighting breast cancer tumors.

The hope is that it will be effective in fighting a variety of other cancerous tumors non-invasively, especially hard-to-reach brain tumors.

As for fibroids, there are medications to treat fibroids, but surgery is a common way to treat them. There's also a treatment called uterine artery embolization, which cuts off the blood supply to a fibroid by clogging up the blood vessels that feed it.

Not all fibroids require treatment. Often a doctor will suggest a "watch and wait" strategy if a woman isn't experiencing any symptoms.

Fibroids are more common in women over 35. Symptoms can include abnormal menstrual bleeding, pain or pressure in the abdomen, pelvis or lower back, frequent urination or incontinence, and constipation.

To find out about already-approved methods to treat fibroids with focused ultrasound, go to insightec.com.