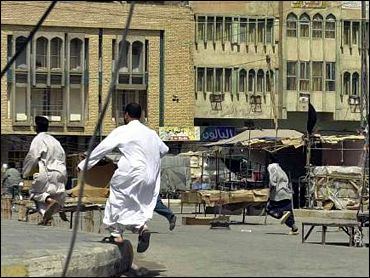 One of the most sacred shrines of Shia Islam suffered minor damage during clashes Tuesday between U.S. forces and radical Shiite militiamen that killed at least 13 Iraqis, some of them civilians. It was unclear who was responsible for the shrine damage.

In Baghdad, a car bomb near a hotel wounded at least five Iraqis, the U.S. military said. The target of the blast, about 100 meters from the Australian Embassy, was not immediately clear.

After the fighting in Najaf eased, people gathered at the Imam Ali shrine to look at the damage. The inner gate of the shrine, leading into the tomb of Imam Ali Ibn Abu Talib, appeared to have been hit by a projectile. Debris was scattered on the ground.

Al-Jazeera television showed a torn veil covering the gate, and damage on the wall around it. It also showed several injured people lying on the floor of the mosque compound, and an angry crowd of more than 100 shouting and shaking their fists at the site.

Supporters of Shiite militia leader Muqtada al-Sadr accused the Americans firing mortars at the mosque, and said 12 people were injured in the mosque compound. The U.S. command in Baghdad said it was investigating reports of damage.

Another projectile landed outside the shrine, about 10 meters away from the outer wall. Three militiamen were injured in that attack, and three fighters were killed in fighting in the city, al-Sadr's office said.

Imam Ali was the Prophet Muhammad's cousin and son-in-law and he is the most revered saint among Shiite Muslims.