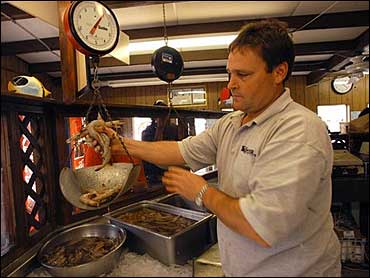 The Bush administration on Tuesday proposed tariffs on shrimp from China and Vietnam, finding that exporters have been dumping shrimp in the United States at artificially low prices.

The proposed tariffs on Chinese exporters range from almost 8 percent to 113 percent, the Commerce Department said. Vietnam exporters face duties ranging from 12 percent to 93 percent on frozen and canned warmwater shrimp and prawn.

U.S. shrimpers and processors, struggling from rock-bottom prices since 2001, filed the antidumping petition in December, seeking duties on shrimp from six nations.

The initial decision is "a critical step on the road to recovery for tens of thousands of fishermen, farmers and processors devastated by the massive volume of dumped Chinese and Vietnamese shrimp," Gordon said.

The decision was also applauded by the Florida state agriculture department.

"In the final analysis, it is anti-consumer, because any time you have dumping, what you have is the impact of driving others out and basically garnering the market for yourselves," spokesman Terry McElroy told CBS News Correspondent Peter King. "We think consumers will benefit by having tariffs imposed."

The U.S. International Trade Commission unanimously ruled in February that the imports were a factor in depressing shrimp prices, a necessary finding for an antidumping petition to be successful.

But U.S. seafood distributors and retailers oppose the duties, warning they will drive up shrimp prices by as much as 44 percent.

The price of shrimp "is clearly going to rise and it's going to rise dramatically if these taxes are left in place," said Wally Stevens, president and chief operating officer of seafood distributor Slade Gorton Co., who also is chairman of an industry task force formed in opposition of the tariffs.

The Commerce Department excluded breaded, fresh, dried and coldwater shrimp and prawns, and those found in prepared meals.

The preliminary decision did not include Thailand, Brazil, Ecuador and India. China and Vietnam were considered separately because they are not free market-based economies. In all, the duties would affect about $2.3 billion in shrimp trade.

The case now will go back to the trade commission, which will make a final determination next January on whether U.S. industry is being harmed by the imports. The Commerce Department then will set final dumping penalties.