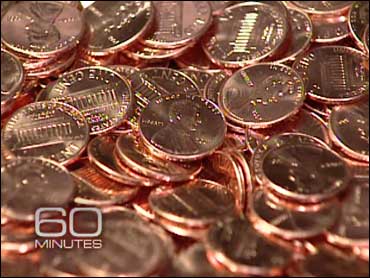 Should we make cents? We're talking about those insignificant one cent pieces in your pocket or purse. It may or may not come as a surprise that it now costs the U.S. Mint almost two cents to make a penny and almost a dime to make a nickel. If the economy of that eludes you, join the club.

As correspondent Morley Safer first reported in February, even in Washington, where they literally have the right to print money and where anything under a billion is chump change, there is an ongoing debate over whether it's worth the trouble to keep making cents.


Every year, the U.S. Mint turns out eight billion shiny new pennies, using hi-tech presses that operate faster than the eye can see, stamping out Abe Lincoln on blank pieces of metal.

Trouble is, to get $80 million in pennies, the government spends $134 million; to produce 1.3 billion nickels, as the Mint did last year, costs $124 million, even though the coins are worth about only half that much.

"It's weird economics, when you really come down to it, isn't it?" Safer asks.

"Well, from our perspective at the United States Mint it's unsustainable. You can't sustain losses on pennies and nickels and expect to be a viable organization that benefits the American people," Moy says.

How did we get in this fix?

"You know, coins are made out of metal. And worldwide demand for copper, nickel and zinc have dramatically increased over the last three years. That's what's primarily driving up the cost of making the penny and nickel," Moy explains.

Nickels are made mainly of copper; pennies are 98 percent zinc. On the frenzied commodity exchange, the price of copper has tripled in the last five years; zinc has doubled. Both are in heavy demand, used in everything from electrical wiring to suntan lotion, so both coins are worth less than the metals they contain. But if you're thinking of putting in a backyard smelter and melting down your spare change to make a profit, forget it. The Treasury Department has declared that illegal.

Asked if there was a fear that people would melt their pennies and sell them by the pound, Moy tells Safer, "Well, you know, other countries that have been in the same situation have ended up having shortages because people melt them. My colleagues in India at the Indian mint have noted that once the rupee became more valuable melted down as razor blades they disappeared overnight. And there was a shortage of rupees that India is still recovering from."

In the five o'clock shadow of the rupee's close shave, Washington is considering ways to reduce the cost of making pennies and nickels. Among them, giving the mint authority to use cheaper metals, like steel. And though efforts in Congress to retire the penny altogether have failed in past years, its detractors say the time has come.

"Inflation has rendered the penny nearly valueless, right? If you can't buy anything with a penny, if it takes at least a nickel or a dime to buy anything, then that individual unit just doesn't serve much good," argues Stephen Dubner, the co-author of the bestseller "Freakonomics," a zany look at money and American culture. He puts the penny in the same category as your pesky appendix and other useless relics.

"It's like having a fifth and a half finger on your hand," Dubner says, laughing. "I have to trim the nail, I gotta buy five and a half fingered gloves. But wouldn't it be easier just to have the five? And that really is what the penny is about. It's just not useful."

Dubner concedes the country suffers from "pennycitis" - a love affair with the penny that's hard to shake. After all, who's on it but that true American Idol honest Abe Lincoln, who, as a young store clerk, walked three miles to return six pennies he'd overcharged a customer. "I think that the two big reasons to keep the penny are inertia, 'cause it takes a lot of work to get rid of something that's ingrained, and nostalgia. But you need to put a price on even nostalgia," he says.

What about the sentimental attachments people have to the penny?

"But I would argue that, you know, in the old days you might have said 'A penny for your thoughts' as a nice kind of way of saying, you know, whatever you're daydreaming about, it's worth something. Now it's an insult. A penny for my thoughts, what are you, what are you, it's only worth a penny? Come on," Dubner says.

What does Dubner do with his pennies?

"Well, I have kids. So I try to teach them early on not to get any pennies to get rounded up or rounded down at any opportunity," he explains. "When we play Monopoly at home we get rid of the ones and the fives. It's like it doesn't matter. It doesn't affect the economy."

But its fans say a penniless America would leave the penniless truly penniless, because merchants would round prices up to the nearest nickel.

Mark Weller is the voice of "Americans for Common Cents," a pro-penny group that claims that rounding up will cost Americans $600 million a year. "You're going to be hurting those that can least afford it. The folks that don't have checking accounts, that don't have charge cards, are the ones that are gonna get hit," Weller argues.

He says without the penny, charities, too, would suffer, on the theory that people are less likely to donate as many nickels. As it is, penny drives around the country collect tens of millions of dollars a year for medical research, for the homeless, for education. "You have school groups all over the country that are raising funds for important causes on Katrina relief or new computers or other issues for their schools," Weller says.

But as Weller freely admits, he's got a financial interest in the high cost of penny pinching: Weller is a lobbyist for Jarden Zinc, the Tennessee company that sells those little blank discs for the mint to turn into Lincoln pennies.

"If you don't have the penny out there, it would be a major kick in the pants to the zinc industry, wouldn't it?" Safer asks.

And on the contention that rounding to the nickel would force prices up, mint director Moy says Weller may have a point. "We've taken a look at the studies of countries who have gotten rid of the lowest denomination coin. There's always at least a one-time inflationary hit upwards," Moy says.

"Prices have a habit of doing that, don't they?" Safer asks.

"People are generally in the business of trying to make money," Moy says.

But the business of making money - literally - isn't all bad. The cost of producing most currency is far below its face value. Paper money for example - ones, fives, tens on up - cost six cents each to print. Only the penny and nickel are big-time losers.

"The nickel you can argue about. And maybe it helps, maybe it doesn't. But to me, the penny is just obvious," says Jeff Gore, a young scientist at MIT who says keeping the penny is costing all of us, in more ways than one.

At work, Gore does research in biophysics. But away from the lab, he's a fearless crusader against the penny, arguing that if time is money, the cent is senseless. "I read somewhere that two or two and a half seconds are wasted per cash transaction as a result of the use of pennies. And I started thinking, you know, that doesn't sound like very much, but you know, maybe it starts adding up if you do the calculation," he says.

Gore has devised an Einsteinian equation of productivity to determine how much time America wastes dealing with pennies, counting them out in stores, giving them back in change, fishing them out of the couch and putting them in penny jars.

"You come out to a wasted time of 2.4 hours per year per person which actually is quite a lot," Gore explains.

And with wages in the country averaging $17 an hour, that means pennies are costing each of us $41 a year. "And you multiply that by 250 million adults in this country, you come out to ten billion per year, which is quite a lot of money," Gore says.

Of course, if you put a price tag on lost time, that's nothing compared to the time America wastes in traffic, on the Internet, and having to listen to imperfect strangers talking on their cell phones. Still, the debate over the penny is one into which everybody puts their two cents worth. Or call it four cents worth.

"I mean, if you ask Americans, 'Do you want to keep or abolish the penny?' most people say they want to keep it. Now, I would argue that those same people would have said they want to keep the rotary telephone. They wanted to keep, you know, carbon paper. They wanted to keep the buggy whip. But you know what? We've done all right without all those. And I think that if the penny were no longer around people would be okay," Dubner argues.

"Americans may differ on what the utility of the penny is. I know when I go home, I have a penny jar just like everybody else. And, but at the end, I still turn those pennies in because they're worth real money," Moy says.

"You as an amateur coin collector, I suspect you're in favor of keeping the penny in your heart of hearts. Yes?" Safer asks.

"Well, as a public official I have no private opinions. But I do know that a lot of people are attached to the penny," Moy replies. "And as long as they continue to being in demand, the mint has an obligation to continue making them."

In fact, the mint is in the process of redesigning the back of the penny to mark two milestones next year: the 200th anniversary of Lincoln's birth and the 100th anniversary of the Lincoln penny itself. Get rid of it? Not likely.