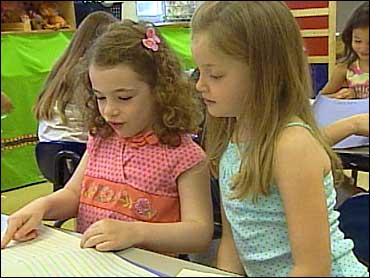 According to the National Center for Health Statistics, in the last 20 years the number of twin births in this country has risen by 75 percent. The number of triplet births has more than doubled since 1990.

As multiple births increase, so does the debate over whether to keep them together or separate in the classroom.

Nicholas and Ryan have always shared a strong connection. So when they became old enough for school, their mom, Kathy Dolan, wanted them in the same classroom. "The boys were constantly exposed to chaos really in their home life. To bring them into kindergarten, separate them not only from me, but to separate them from each other, would have been catastrophic," she says.

But Kathy was in for a surprise. "I went in for registration and asked for the boys to be placed together and I was immediately told there is a mandatory separation," she recalls.

So she decided to fight back — and ultimately the boys were kept together. "It makes a huge difference to have that comfort zone there. They can then concentrate on their academic studies and not have to worry about, 'Where is my brother?'" Kathy says.

Motivated by the mandatory separation policy at her school, Kathy and a friend launched a Web site, now called twinslaw.com. She hopes to get a bill passed that would give parents more choices.

"It allows parents of twins, triplets and higher order multiples to determine their classroom placement of their children within the first 14 days of the school year," Kathy explains.

There is progress: Since 2005 Texas, Georgia and Minnesota have passed twin legislation and 23 states have begun campaigns.

But not everyone thinks this choice is necessary. Turner sat down with a group of mothers of twins in Harrington Park, N.J. — all with different opinions.

Only one of the moms, Liz Bodenstein, thought it is right to automatically separate the twins in school. "I feel they're individuals, and from the time my boys were in their second year at nursery school I had them separated. For them I just think it's healthier," she explains.

But Bettyann Niece, also a mother of twins, disagreed. She thinks it should be a personal choice.

Florence Savoye shared her experience with separating her twins. "I asked to have them separated in preschool and their behavior at home was 200 percent better in a week," she says.

Nancy Segal is an expert on twins and author of "Indivisible By Two." She believes twins never benefit from forced separation and says it should be handled on a case-by-case basis.

"There are studies showing there are advantages of keeping some twins together. It's not just an idea that parents have come up with," Segal says. "If we are advocates for our twin children, I think we better pay attention to those twin studies."

Florence has two sets of twins, one set co-ed and the other set same sex. "My boy-girl set are at the age right now that I separated my girls. My boy-girl set are going to go to the same class next year in preschool and they'll be together. But I find that the gender difference decreases the competition so much."

There's also the issue of identity. "Come second grade, Charlie said, 'That's it, I'm growing my hair,' because their friends couldn't even tell them apart anymore. And they used to come to me all upset going 'Mommy, why don't they know who I am?'" explains Bettyann.

So who should make this decision? The roundtable of moms thinks it should be a group decision, including the parent, the child and the school.

"I really believe if you pay attention to the children, in their own way they will let you know what is best for them," says Segal.

"Sometimes I think that your emotions may cloud your judgment when it comes to your children, we're all guilty of it and therefore sometimes with well meaning you make the wrong decision for your children," says Shelley Esposito, who also has twins.

Kathy believes that she made the right decision for her family and she is glad she fought to keep her kids together. "They've done wonderful, they've been great partners helping each other, even with studying for tests," she says.