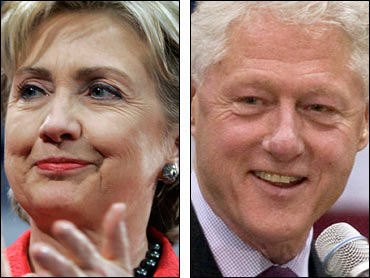 This column was written by Michael Crowley.

Like a terrible werewolf moon, Bill Clinton is shining again in his full brilliance. A new wave of commentary, from The New Yorker to Newsweek to The Wall Street Journal to The New York Times, has concluded that Bill's role in his wife's presidential campaign has mainly damaged both Hillary Clinton and his own legacy. Bill clumsily played the race card, they say. Bill doesn't understand new media. Bill is embittered and angry.

But maybe it didn't have to be this way. Maybe Bill's role could have been entirely different. What if Hillary had placed Bill front and center in her campaign? What if the Clintons had run as equals - and offered what would effectively be a co-presidency - from the very start?

Early in the campaign, Hillary's strategists had good reason to keep Bill away from center stage. With her clunky speaking style, Hillary suffered in direct comparison to her spouse's political magic - something made clear after the two spoke in succession at Coretta Scott King's February 2006 funeral. Hillary seemed a rusty Honda Accord to Bill's Maserati convertible.

So, yes, it was essential that Hillary to establish her individual identity, find her own voice, demonstrate to America that she is a serious and accomplished woman in her own right. She could not - would not - merely be a stalking horse for a third Bill term.

That needn't have lasted indefinitely, but it did. Whether because Hillary was determined to prove herself, or because a co-presidency seemed too complicated to market, Bill was designated a second banana. And he has remained that way, in a subordinate role that seems strangely removed from the heart of Hillary's machine. Yes, Hillary references "my husband's administration," but she spends far more time dwelling on her own, less impressive personal narrative. Her campaign literature, advertisements, and stump speeches rarely dwell on Bill's accomplishments. The two rarely campaign together: His campaign visits tend to be in remote areas that don't make the cut for Hillary's itinerary. With his self-deprecating jokes about being "first lady," and doing whatever Hillary asks him to do, Bill tends to play the role of a humble, dutiful spouse who is simply along for a somewhat wacky ride.

But this approach has clearly failed. It has left the Clintons with the worst of both worlds. It has prevented Hillary - whose own record of accomplishment is thin - from drawing much benefit from Bill's experience and legacy. At the same time, it has stuck her with all the downsides of Bill's political and temperamental failings.

The approach was strained from the outset. Bill Clinton is no ordinary spouse. It's absurd to reinvent him as anything close to Laura Bush. So perhaps Hillary's campaign should have openly assured that Bill would have a key decision-making role in the Oval Office. He could have joined Hillary regularly for joint campaign events - possibly even for town halls where both Clintons would take voter questions at once. Clinton campaign signs and literature could have made more references to Bill's presidency and foundation works. TV ads could have touted the experience and smarts he would return to the White House. Every campaign venue might have featured cheery "Two for the Price of One" signs festooning the walls. Hillary spent much of her campaign dodging the elephant in the room - her husband and his presidency - but perhaps she should have ridden it.

Think of the potential benefits. First, this approach would have rendered moot the long and often damaging - think Tuzla - debate about Hillary's "experience." During one infamous campaign conference call, her aides were stumped when asked what real crisis she'd ever managed. In a co-campaign, they could have immediately shot back, "Bill's answered dozens of those calls!"

Second, treating Bill more as a co-candidate would have better exploited his (now squandered) stature among Democrats. By relegating him to the role of humble spouse, Hillary's team diminished his global statesman status.

Instead of letting him blab to junior MSNBC producers on the rope line in Ottumwa, Bill should have maintained his air of gravitas through more forums highlighting his foundation work in places like Africa and the Middle East.

The next point is paradoxical: Had Bill spent more time at the center of the campaign, he might have said fewer stupid things. He has seemed to lash out in part because people don't take him seriously enough. We constantly find Bill berating reporters for ignoring the substantive issues he spends all day talking about but which never get covered. In other words: By granting Bill the spotlight, he might feel less compelled to steal it.

Then there's the likability question. Hillary may be wonderful in person, but many voters seem to find her grating. Bill survived the '90s in part thanks to an ability to talk his way past the Clinton baggage. But with her more charismatic husband out of view, Hillary couldn't pull off the same trick.

Finally, as a co-candidate. Bill might have been covered very differently. One subtext of Bill's snarky coverage is a crude amusement with the Clinton marriage. Many reporters see the Clintons as a sham couple - a business partnership. Some even suspect Bill secretly wants Hillary to lose. (To see Bill's grueling travel schedule through endless dreary towns is to realize the silliness of this idea.) Reporters are quick to play up Bill's gaffes in part because they can't resist the implicit humor of the naughty husband getting in trouble again. A sense of the couple in greater harmony might have smothered that narrative.

This would have been a risky strategy to be sure, and without the benefit of hindsight few people might have recommended it. There's no telling whether it would have worked. But one thing is certain: The strategy Hillary chose has led her to the brink of defeat--and badly sullied Bill's reputation along the way. It's hard to imagine this alternative turning out much worse.

By Michael Crowley
If you like this article, go to www.tnr.com, which breaks down today's top stories and offers nearly 100 years of news, opinion and analysis