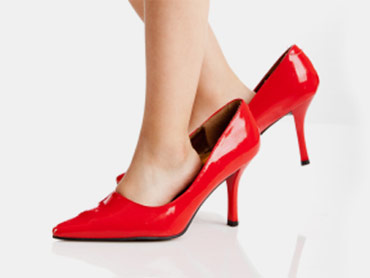 There is a growing trend of little girls wearing high heels. However, there are many health-related concerns that have parents trying to steer their kids away from these fashions.

Dana Points, editor in chief of Parents magazine, appeared on "The Early Show" to discuss these concerns, and how to talk to your child about high heels.

"Early Show" co-anchor Maggie Rodriguez remarked that little girls often like to play princess in high heels, and if it were up to them they would stay in their costumes all day long.

"They idolize Cinderella," Points said. "Their mommies wear heels. … So it's no surprise little girls want to wear heels. The key is it's like for dress-up at this age -- and really for many years."

Points added wearing heels at an early age is also a health concern.

"At the age of 5 and on up until 10, 12, the bones are still forming. The print is forming," she said. "You can get some shortening of the tendons in the heels. So you really don't want to let them spend more than a little time every week in some kind of heel."

For health reasons, Points said girls should avoid heels until age 12 or 13.
"I know that seems like a long time if you have a 6-year-old who is desperate for wear heels but this too shall pass," she said.

Rodriguez pointed out that to combat this problem is involve your daughter in picking out her own shoes. However, Rodriguez said when she goes to the store, she can't find shoes these days without heels for little girls.

"I think you kind of have to pre-shop a little and then give them a choice," Points suggested. "And look for other ways that things can be kind of snazzy, whether it's colors or clip-ons or things like that. So just don't give them the choice of heels from the get-go. Say, 'We're going to the store, we're not buying heels."

Rodriguez added, "And don't let them see pictures of Suri Cruise."
Suri has been seen in several photos wearing child-size high heel shoes.
Another way to dissuade your child from wearing high heels, Points said is to point out dangers and restrictions.

But can really do that with a small child?

Points said, "You can say to a really young child, 'You're not going to be able to run and chase and play with your friends,' because at that age if somebody wanting to play tag, they're off like a shot. So just say to them, 'You won't be able to keep up. Why don't you wear the sneakers today?'"