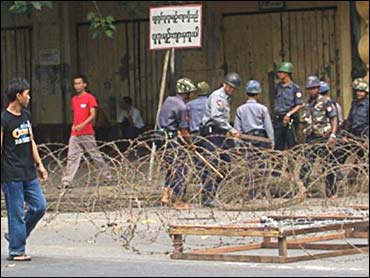 Soldiers fired warning shots above an estimated crowd of 70,000 anti-government demonstrators who gathered in Yangon Thursday in defiance of a crackdown that has sparked international concern and appeals to Myanmar's ruling junta to show restraint in its reaction to the protesters.

Witnesses said at least one man had been shot, though the weapons fire did not appear to be aimed directly at the crowd that had gathered at Sule Pagoda.

Protesters shouted at the soldiers, angry about early morning raids by security forces on Buddhist monasteries during which soldiers reportedly beat up and arrested more than 100 monks.

Earlier Thursday morning, China called on all sides in Myanmar to exercise restraint and exhorted foreign media not to worsen the situation by exaggerating events.

"China hopes all parties can exercise restraint and properly handle the situation," Foreign Ministry spokeswoman Jiang Yu said at a media briefing. She said foreign reports risked "exaggerating and hyping up" the situation.

The unfolding crackdown by Myanmar's government against democracy demonstrators, many of them Buddhist monks, has put China in a difficult position.

The communist government has developed close diplomatic ties with Myanmar's government and is major trading partner and investor. But with the Beijing Olympics 11 months away, China has been fending off criticism that it shelters unpopular or abusive regimes around the world.

Wednesday, security forces in Myanmar opened fire on demonstrators, and witnesses said police beat and dragged away dozens of Buddhist monks. The government said at least one person was killed, while dissident groups and media reported up to eight dead.

The military junta's announcement on state radio and television was the first acknowledgment that force has been used to suppress the protests and its first admission that blood had been shed after a month of mostly peaceful demonstrations.

The United States and the European Union condemned the attacks and called on the military rulers to open a dialogue with pro-democracy leaders, including detained opposition leader Aung San Suu Kyi, according to a joint statement on the sidelines of the U.N. General Assembly.

About 300 monks and activists were arrested on the ninth straight day of anti-government protests in Yangon, dissidents said, although that number could not be independently confirmed.

Myanmar's leaders had warned the monks to stop the protests after some 100,000 people joined marches Monday in the largest anti-government demonstrations since a 1988 pro-democracy uprising was violently suppressed in the country formerly known as Burma.

The government said security forces opened fire after the crowd of 10,000 people, including "so-called monks," failed to disperse at Yangon's Sule Pagoda. It said the police used minimum force.

The dead man, aged 30, was hit by a bullet, the announcement said. It added that the wounded, two men aged 25 and 27, and a 47-year-old woman, were also hurt when the police fired, but did not specify their injuries.

Witnesses who were known to The Associated Press said they had seen two women and one young man with gunshot wounds in the chaotic confrontations.

Zin Linn, information minister for the Washington-based National Coalition Government of the Union of Burma, which is Myanmar's self-styled government-in-exile, said at least five monks were killed, while an organization of exiled political activists in Thailand, the National League for Democracy-Liberated Area said three monks had been confirmed dead, and about 17 wounded.

The reports could not be independently confirmed by the AP.

The security forces had fired warning shots and tear gas to try to disperse the crowds of demonstrators while hauling away the defiant, cinnamon-robed monks into waiting military trucks - the first mass arrests since protests in this military dictatorship erupted Aug. 19. The monks are highly revered in Myanmar.

In its joint statement condemning the attack on protesters, the United States and the EU urged the Security Council to "discuss this situation urgently and consider further steps including sanctions."

It also urged China, India and Southeast Asian nations to use their influence to end the crackdown.

"The European Union and the United States express their solidarity with the people of Burma/Myanmar. We are deeply troubled by reports that security forces have fired on and attacked peaceful demonstrators and arrested many Buddhist monks and others," the joint statement said.

"We call on the authorities to stop the violence and to open a process of dialogue with pro-democracy leaders including Aung San Suu Kyi and representatives of the ethnic minorities," the document said.

Assistant Secretary of State Daniel Fried said after the meeting at the EU mission in New York that the diplomats agreed the "text had to be very strong."

On Tuesday, President Bush announced new U.S. sanctions against Myanmar, accusing the military dictatorship of imposing "a 19-year reign of fear" that denies basic freedoms of speech, assembly and worship.

David Miliband, the U.K. Foreign Secretary, said Wednesday morning after a conversation with the British Ambassador to Myanmar that the "situation remains very tense."

"It's important that they (junta) continue to understand that restraint must remain the order of the day," Miliband told reporters, adding that the military regime seemed at least cognizant of the fact that the world was watching very carefully.

Paulo Sergio Pinheiro, who was appointed as the U.N's independent expert on human rights in Myanmar seven years ago, told the AP the confrontation between the monks and the security forces will end in "a disaster" unless the international community makes a concerted effort to stop further escalation.

The use of force will almost certainly put pressure on Myanmar's top economic and diplomatic supporter, China, which is eager to burnish its international image before next year's Olympics in Beijing.

When faced with a similar crisis in 1988, Myanmar brutally suppressed a student-led democracy uprising. Soldiers shot into crowds of peaceful demonstrators, killing thousands.

The junta had banned all public gatherings of more than five people and imposed a nighttime curfew following eight days of anti-government marches led by monks across the country in the largest protests in nearly 20 years.

As the ninth day of unrest began Wednesday, the crowd of monks and students - along with members of Suu Kyi's pro-democracy party - set off from the famed Shwedagon Pagoda to the Sule Pagoda in the heart of the city, but were blocked by military trucks along the route.

Other blocs of marchers fanned out into downtown streets with armed security forces trying to disperse them. There were reports of destruction of property but it was unclear whether this was carried out by the demonstrators or pro-junta thugs, who were seen among the troops and police. Witnesses said an angry mob at the pagoda burned two police motorcycles.

"They will kill us, monks and nuns. Maybe we should go back to normal life as before," said a young nun, her back pressed against the back of a building near the scenes of chaos.

But a student at a roadside watching the arrival of the demonstrators said, "If they are brave, we must be brave. They risk their lives for us."

The two asked that their names not be used for fear of reprisals.

Other protesters carried flags emblazoned with the fighting peacock, a key symbol of the democracy movement in Myanmar.

Soldiers with assault rifles had earlier blocked all four major entrances to the soaring pagoda, one of the most sacred in Myanmar, and sealed other flash points of anti-government protests.

A comedian famed for his anti-government gibes became the first well-known activist rounded up following the protests. Zarganar, who uses only one name, was taken from his home overnight by authorities.

The junta imposed the 9 p.m.-to-5 a.m. curfew and ban on public assembly after 35,000 people monks and their supporters defied the warnings Tuesday.

The demonstrations began after the government raised fuel prices in one of Asia's poorest countries. But they are based in deep-rooted dissatisfaction with the repressive military rule that has gripped the country since 1962.

In Mandalay, Myanmar's second-largest city, more than 800 monks, nuns and laymen played a cat-and-mouse game with some 100 soldiers who tried to stop them marching from the Mahamuni Paya Pagoda, which they had tried to enter earlier.