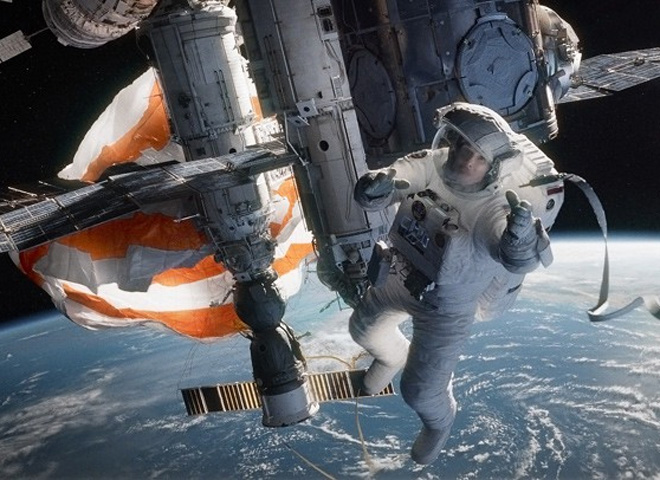 BEVERLY HILLS, Calif. – Ten films are in the running for an Academy Award nomination for Best Visual Effects, it was announced Thursday.

The executive committee of the Academy's Visual Effects Branch selected the shortlist. Members of the branch will then view 10-minute excerpts from each film on January 9, 2014 -- the celebrated "bake-off" -- before voting for the final five nominees.

To watch behind-the-scenes footage and clip reels from FX houses that show how some of the year's most spectacular scenes were visualized and created, click on the embedded video players below.

Neill Blomkamp's futuristic tale of class warfare (which boiled down to a message that universal health care is a good thing) had a style similar to his previous sci-fi hit, "District 9," with computer-generated characters, spacecraft and backgrounds seamlessly blended with hand-held camerawork, as this clip reel from Vancouver FX house Image Engine shows.

The giant in the room, effects-wise, is Alfonso Cuaron's "Gravity," the 3-D spectacle of an astronaut stranded in Earth's orbit after the space shuttle suffers a catastrophic event.

The trailer doesn't give away the filmmakers' secrets, but it does offer a generous helping of the movie's stunning opening scene, concocted in a seemingly single take.

"The Hobbit: The Desolation of Smaug"

This video production reel from the second of Peter Jackson's trilogy based on the J.R.R. Tolkien adventure film shows the green screen filming done on stage and on location, along with glimpses of motion capture performances and pre-viz sequences.

If you watched "Iron Man 3" on an airplane, you likely had the film's best scene snipped by the airline -- understandably, as it involves Air Force One being subject to depressurization during flight, with its passengers sucked out thousands of feet above the ground.

But you can at least watch how the layers of practical effects (including stunt people leaping out of a tiny plane) were merged with background plates and a computer-generated Air Force One, courtesy of Digital Domain.

This breakdown from the film's train wreck sequence reveals the layers of separate shots that were then compiled and rendered as a single 3-D frame. More details are available from the FX Guide website.

SPOILER ALERT!  Otherwise you'll be confused as to why certain characters appear in duplicate, in this clip reel from Digital Domain. (Click here to open video.)

Wired Magazine produced this behind-the-scenes look at the making of the Marvel Comics superhero adventure, including the practical effects created on stage and on location, to be merged with artful CGI graphics.

Two highlight reels, from Mirada Studios (above) and Rodeo FX (below), detail the dense imagery of giant robots battling giants monsters from beneath the sea.

This breakdown reel from Cinesite shows how locations were expanded and populated with CGI figures of the undead variety.

Below, a highlight reel from MPC shows the Jerusalem scenes in which throngs of zombies swarm the city's defensive walls and bring down a helicopter.

Academy Award nominations will be announced live on Thursday, January 16, 2014, at the Academy's Samuel Goldwyn Theater, with the Oscars to be presented Sunday, March 2, 2014, at the Dolby Theatre at Hollywood & Highland Center.