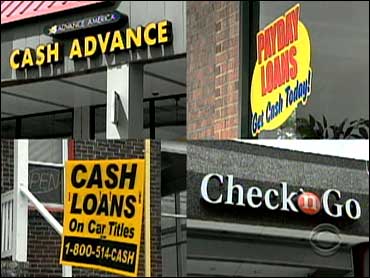 In the current state of the economy, about 2,600 Americans a day file for bankruptcy. Others are turning to a financial quick fix called "payday loans." They've now grown into a $59 billion industry. But six states - Arkansas, Georgia, New Hampshire, North Carolina, Ohio and Oregon as well as the District of Columbia - have now effectively banned these loans, and CBS News chief investigative correspondent Armen Keteyian looks at why.

Today there are 24,000 payday lending stores in America - more than Starbucks and McDonald's combined. They provide 19 million American households a quick way to make ends meet.

"Please borrow only what you feel comfortable paying back," says a video by the lending industry.

A typical customer takes out about eight payday loans a year - in essence, an advance on their paycheck - with rates as high as 20 percent, Keteyian reports.

For lower- and middle-class families with few financial options, such loans - even at that price - are a godsend.

But folks like Mary Bates now see something else - a short-term solution turned long-term trap.

"An endless cycle; a dead end," Bates said. "I would advise anyone not to."

For Bates it all began with a $400 payday loan - plus $70 interest - to fix her car. But after paying it off two weeks later, she couldn't afford to live on what was left.

So she took out another loan, starting a two-year cycle with a variety of payday lenders that ended up costing this single mother of two what she says was more than $1,500 in interest to essentially "float" a $400 loan.

"They are set for people like me, that live payday to payday. And then once you're in there, you can't get out," she said.

"Fifteen to 20 minutes, you can walk out with cash in hand," said Terrence Jent, one of eight former industry employees who spoke with CBS News.

"Incentives that you offer to customers to get them to become repeat borrowers," Jent said.

Like "take out five loans, get the sixth one free." Or offering cash to managers of low-income buildings to refer desperate tenants.

And this document, obtained by CBS News reveals that among the targets for at least one payday lender are: "single-parent households with multiple children," who are "financially stressed."

"We had people all the time that would come in and take out a loan to pay their retainer fee on their lawyers to file bankruptcy," Jent said.

Looking at the industry's own Web site, we discovered that two of the customers profiled there actually declared bankruptcy - partly due to multiple loans from payday lenders.

"Did you also know that two other people on your Web site have subsequently declared bankruptcy and they listed payday lenders as part of the reason that they were pushed over the edge?" Keteyian ask

"But I think you'd find that payday lenders would be a small percentage of whatever debt - people have when they do declare bankruptcy," Medsker said.

"What happens without the option of taking on a payday loan? Does someone ... is it better off if they bounce a check? What would you recommend that these people do?" Medsker said.

Mary Bates knows full well what she will do the next time she's in a bind.

"I would do without electricity, water, whatever it would take until the next pay day - until I could pay," she said. "I would not do it."

It's a long-term lesson about instant cash Bates hopes others won't learn the hard way.