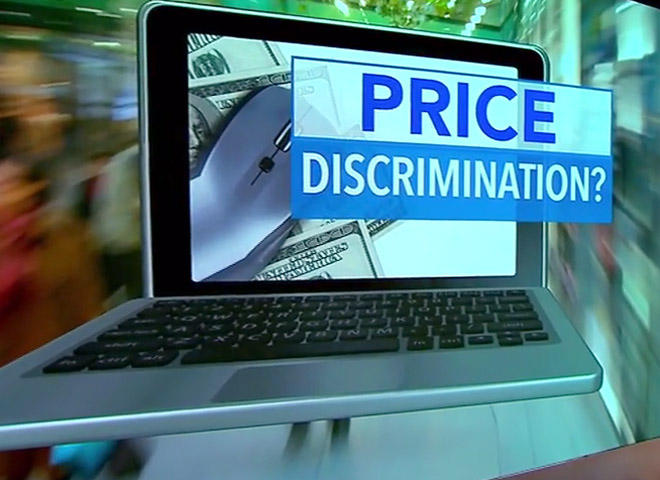 If you went to your local coffee shop and learned you’d be charged four dollars, when the guy in front of you was only charged three, because the shop had been studying your buying behavior, you’d probably feel it was wrong. But that’s just what may be happening to you when you shop online.

According to software developer Christian Bennefeld, businesses know a lot more about us than we think. He says companies can track virtually everything you do online, including what websites you’ve visited, what items you’ve purchased, your location, or what device you may be using.

And based on that, you may get different search results, and even prices.

Take, for example, a sample search he did for a hotel room in Paris on Travelocity.

Using his latest invention, a device called eBlocker that allows him to act as if he were searching from two different devices, the search produced two different prices.

Travelocity’s prices for the Hotel Le Six in Paris: $175, and -- for the same hotel -- $198. The results, done basically at the same time, revealed those searching with a PC would pay $23 more.

“No, it’s not fair,” Bennefeld laughed. “But that is the reality on the internet.”

Travelocity told CBS News: “The difference in price is likely attributable to a deal this hotel was offering to customers on mobile devices exclusively, an increasingly common practice in the travel industry.”

And those varying prices aren’t limited to hotels, or any one site.

A 2014 Northeastern University study found evidence of personalized prices on nine out of 16 e-commerce sites, “including cases where sites altered prices by hundreds of dollars.” On some sites, it said users were steered toward more expensive hotels.

But Bennefeld says a consumer likely won’t know the exact reasons. “It depends on the retailer’s strategy on how to price the goods on his particular website,” he said.

Randall Rothenberg, with the Interactive Advertising Bureau, a trade association representing digital marketing and advertising companies, says there’s a positive side to all that tracking companies do, too: it allows them to customize offers that customers do want.

“But to target, they all need the data about you and me?” Werner asked.

“I think a better way of looking at it, instead of thinking about data, which sounds like this ominous word, think of it as ‘behavioral information.’ They need interest-based information about you.”

“But it’s a little creepy.”

“Sure! Sure, it’s a little creepy,” Rothenberg said. “But you know, so is all the stuff the credit card companies and the retailers have been collecting about you for decades and decades.”

Werner says there are ways to stop companies from tracking you. You can use that eBlocker device (which you plug into your router at home), or use separate browsers or even separate devices for shopping. But depending upon retailers’ deals, you may not be guaranteed a lower price if you restrict searches to your mobile device or your laptop.

You should also make sure to clear your browser history on a regular basis.

Price discrimination is legal, so it’s your responsibility, as the consumer, to protect yourself.