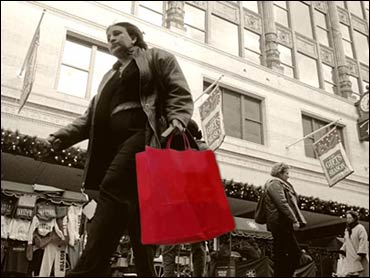 America's shoppers had a tight grip on their pocketbooks and wallets in June, dropping sales at the nation's retailers by 1.1 percent. It was the largest decline in 16 months.

The buying retreat, reported Wednesday by the Commerce Department, came after shoppers had splurged in May. In that month, they pushed merchants' sales up by a strong 1.4 percent, a showing that was even better than first estimated a month ago.

Bad weather and the lingering effects of high energy prices were blamed for the pullback, economists said. Another possible factor: a slowdown in the growth of the nation's payrolls in June. The economy added a net 112,000 jobs last month, less than half of the amount that economists had forecast.

The 1.1 percent drop in retail sales was the largest since February 2003, when sales fell by the same amount. June's decline was shaper than the 0.7 percent drop that some economists were predicting.

"Soft but certainly not a disaster," summed up Steve Stanley, chief economist at RBS Greenwich Capital.

The falloff was led by a sharp 4.3 percent decrease in sales at automobile dealerships, which enjoyed a sizable 3.2 percent gain in sales during May.

Excluding sales of automobiles, all other sales dipped by 0.2 percent in June, compared with a 0.9 percent rise in May. The modest 0.2 percent drop in overall sales, excluding autos, matched economists' expectations.

However, sales of furniture, electronics and appliances, building and garden supplies, health and beauty products, and sporting goods, books and music all showed gains.

Shoppers play an important role in shaping the economy because their spending accounts for roughly two-thirds of all economic activity.

Economists are hopeful that a slowdown in consumer spending will be more than offset by stronger investment by business as well as better activity from other parts of the economy, thus keeping economic growth on a solid path.

Stuart Hoffman, chief economist at PNC Financial Services Group, estimates that consumer spending grew at an annual rate of around 2.5 percent in the April-June quarter, down from a 3.8 percent growth rate in the previous quarter.

Even so, Hoffman predicts economic growth, as measured by the gross domestic product, increased at a rate of around 4 percent in the second quarter — close to the 3.9 percent pace seen in the first three months of this year. The government's first estimate of second-quarter GDP will be released on July 30.

Looking ahead, Hoffman and other economists believe consumer spending will rebound in the current July-September quarter.

Federal Reserve Chairman Alan Greenspan and his colleagues believed the economy was in sufficient shape to embark on their first credit-tightening campaign in four years. The Fed on June 30 boosted a key short-term rate to 1.25 percent, from a 46-year low of 1 percent, in an effort to prevent the expanding economy from igniting inflation.