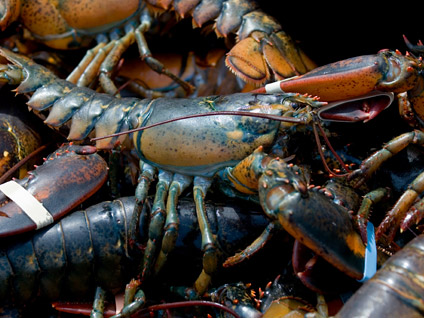 A man in southern Mississippi is accused of trying to walk out of a grocery store without paying for food items that he stuffed into his shorts - including live lobsters.

Police Chief Wayne Payne (you can ask his parents) says 35-year-old Nathan Mark Hardy was arrested Saturday after allegedly being caught stuffing food into his cargo shorts - two live lobsters, two bags of jumbo shrimp, and a pork loin, too.

Payne says Hardy, of Biloxi, tried to escape by throwing the pork loin at employees at the Winn Dixie in D'Iberville, but fell while running away. He was arrested at the scene.

Caught in a lobster trap of his own making?

The shoplifting charge is a misdemeanor, but Hardy remained jailed Wednesday  with no bond pending a hearing on a probation violation.