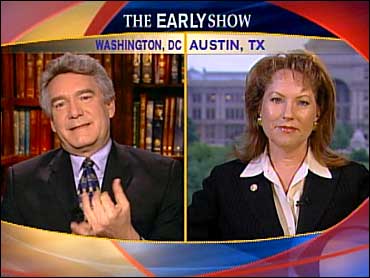 The deadliest campus shooting in U.S. history has renewed the debate over gun control.

Advocates of wider gun control blame the recent string of deadly shootings, including the Amish school shooting in October in Pennsylvania, on the availability of guns in the U.S. They say there has been no new legislation on control of guns since the Columbine incident, which occurred eight years ago this week.

But those in the pro-gun camp say that if people are allowed to carry concealed weapons to protect themselves, they can prevent these kinds of tragedies from occurring.

Maggie Rodriguez, who is filling in for The Early Show co-anchor Hannah Storm, moderated a debate between Paul Helmke, president of the Brady Center to Prevent Gun Violence, and Suzanna Hupp, a former Texas state representative and concealed weapon advocate. Hupp saw her parents gunned down at Luby's Cafeteria in Killeen, Texas, in 1991 when George Hennard killed 23 people and wounded 20 others before taking his own life.

Hupp said she also believes that this kind of horrific incident is preventable, but she and Helmke disagree about how to do it.

"It amazes me that our politicians don't get the fact that these mass shootings only occur in places where guns aren't allowed," said Hupp, who spoke via satellite from Austin, Texas. "They occur in gun-free zones. Think about it. Columbine, he mentioned — post offices, day care centers, other schools, universities. Why are we removing my teachers' right to protect themselves and the children that are in their care?"

If she had her gun the day her parents were killed, Hupp says she would have been able to make a difference and perhaps save some people.

"There's absolutely no doubt in my mind things would have been different that day," she said. "I believe in this particular scenario, when Virginia Tech apparently stood up in front of a hearing and said they didn't want people to be able to protect themselves on campus, at that point, they had the responsibility and the liability to protect those people and they didn't. You basically are creating a shopping list for a madman. Somebody who wants a high body-bag count goes to a gun-free zone."

Helmke said that Hupp raised legitimate points, but a deeper problem is that many politicians don't even want to open discussion about the problem of guns — whether it is solved by having more control or less.

"Most politicians just run away from this issue," he said. "We need to start asking them what their proposals are … Maybe if you have strict licensing, permitting and registration, maybe you would have more guns.

"Actually, these killings occur all sorts of places. Fairfax, Va., police station, just 11 months ago, had two police officers killed at the police station. We make it too easy to get these guns.

"Let's prevent these folks from getting these guns in the first place. Then we can argue about how best to react when they're coming to the shooting. If they can't get that gun with a high-powered clip that's shooting off that many rounds that quickly, then we're making our whole — our community safer."

But Hupp pointed out that the shooter at Virginia Tech did not have an automatic weapon but rather a semiautomatic, which meant he had to pull the trigger each time he fired. But even if the shooter had used revolvers, Hupp said that people need the ability to protect themselves.

"When you make gun laws like this, it only takes the guns out of the hands of the normal, sane people, if you will," she said. "It keeps them from protecting themselves. None of the mass shootings have occurred in places where guns were allowed. You don't see these things happening at NRA conventions or the dreaded gun show that you all talk about frequently."

But Helmke pointed out that guns, other than the ones being displayed, have been banned from entering gun shows. He said cities, states and countries that have more guns have more violence and that "we need to prevent these people from getting the guns in the first place."

Hupp interjected: "How do you do that?"

"Stop high-capacity clips," Helmke said. "A semiautomatic weapon, you can get off 25 rounds in under 15 seconds — generally if you know what you're doing. It's just a single finger twitch."

Those on his side of the issue have proposed things like assault weapons bans and background checks, mostly to no avail, Helmke said. In Virginia, he said, people don't even have to go through a background check if they are buying from a non-licensed dealer or non-licensed seller at the gun show.

"Do an assault weapons ban ... Ban these high velocity clips," Helmke said. "Stop multiple sales of handguns. Look at registration licensing. There's a lot of things. But nobody has done anything."

But Hupp said she doesn't think guns can effectively be kept out of the hands of people who want to do harm. That is why people should be allowed to protect themselves.

"You cannot name me one place where a mass shooting has occurred where it wasn't in a gun-free zone," Hupp said. "I want my children protected. I want my teachers to be able to protect themselves."